Top Pro Photographer Ashley Boring is known for her creative and stylized portraits. Using very different lighting setups, she takes us behind the scenes in this one of a kind photo shoot that resulted in three unique looks.

In her first portrait, Ashley wanted a clean and classic monochromatic portrait. She compiled a variety of elegant makeup and hairstyles for her mood board so the hair and makeup team could match the vision that she was aiming for. Her lighting consisted of a one-light setup using the FJ400 strobe modified with a 53” white interior deep umbrella and front diffusion fabric. This modifier combination produced a soft and controlled light source for the classic look that Ashley aimed to capture.

Ashley angled her light source slightly above her model’s head in a butterfly position and feathered the light. After taking a few test shots, she felt the background was capturing darker than she wanted, so she repositioned her model and the light closer to the backdrop so the flash illuminated her model and background more. 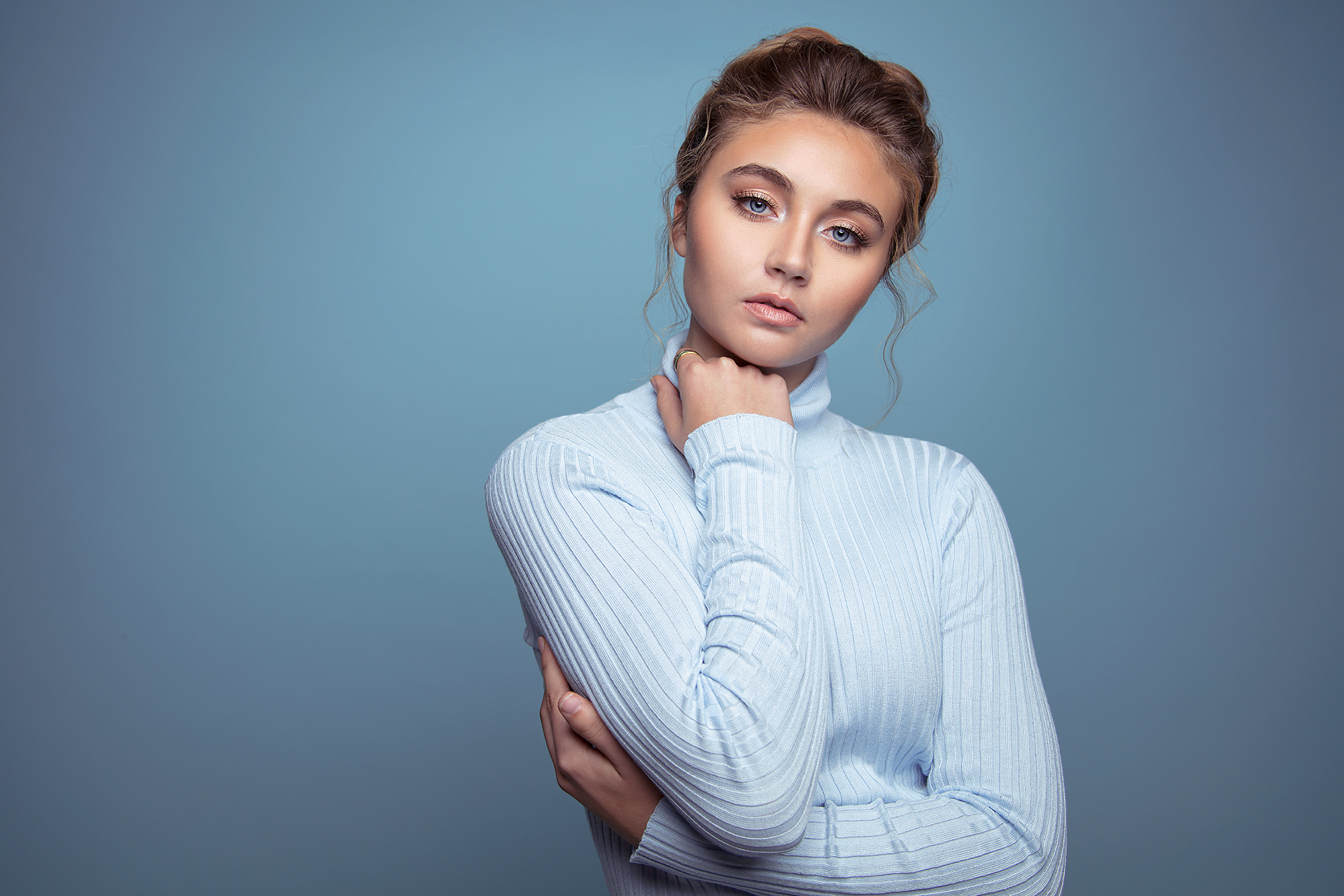 For her second portrait setup, Ashley wanted to apply a more creative touch to her scene by adding a lace fabric applique to her model’s look. She selected a romantic, deep red color backdrop and the 47” Zeppelin deep parabolic softbox to give her lighting more contrast with deeper shadows. She mounted the FJ400 strobe inside of the deep parabolic softbox using the Zeppelin Arm. Ashley wanted to keep a monochromatic feel, so she chose a red lipstick and neutral eye for her model, to match the applique and backdrop.

To avoid harsh shadows across her model’s face, she feathered the light by positioning her light source higher and to the side at an angle. After a few test shots, Ashley wanted to brighten up a few of the shadows, so she pulled in a white reflector and placed it on the opposite side of her subject to bounce the flash. 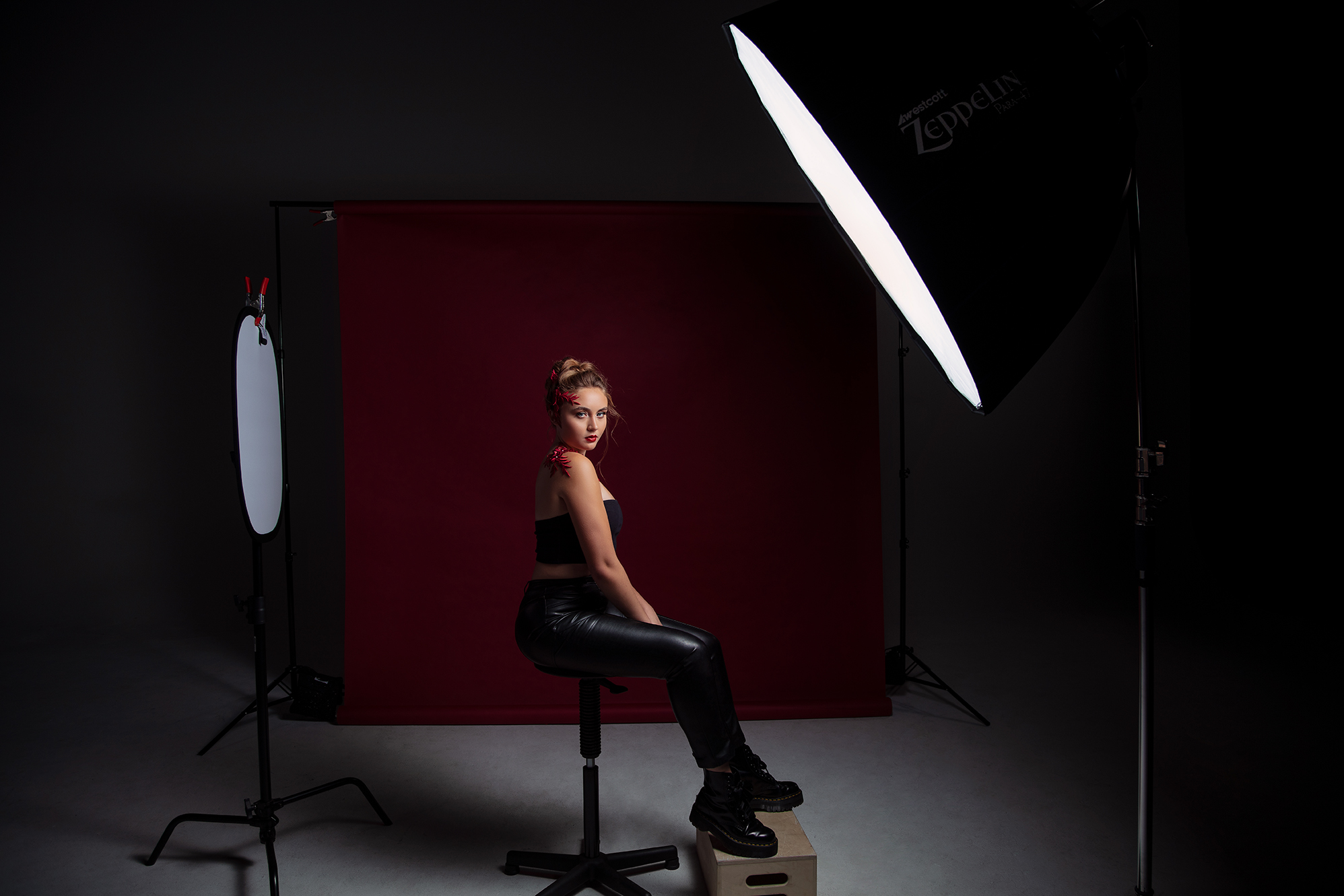 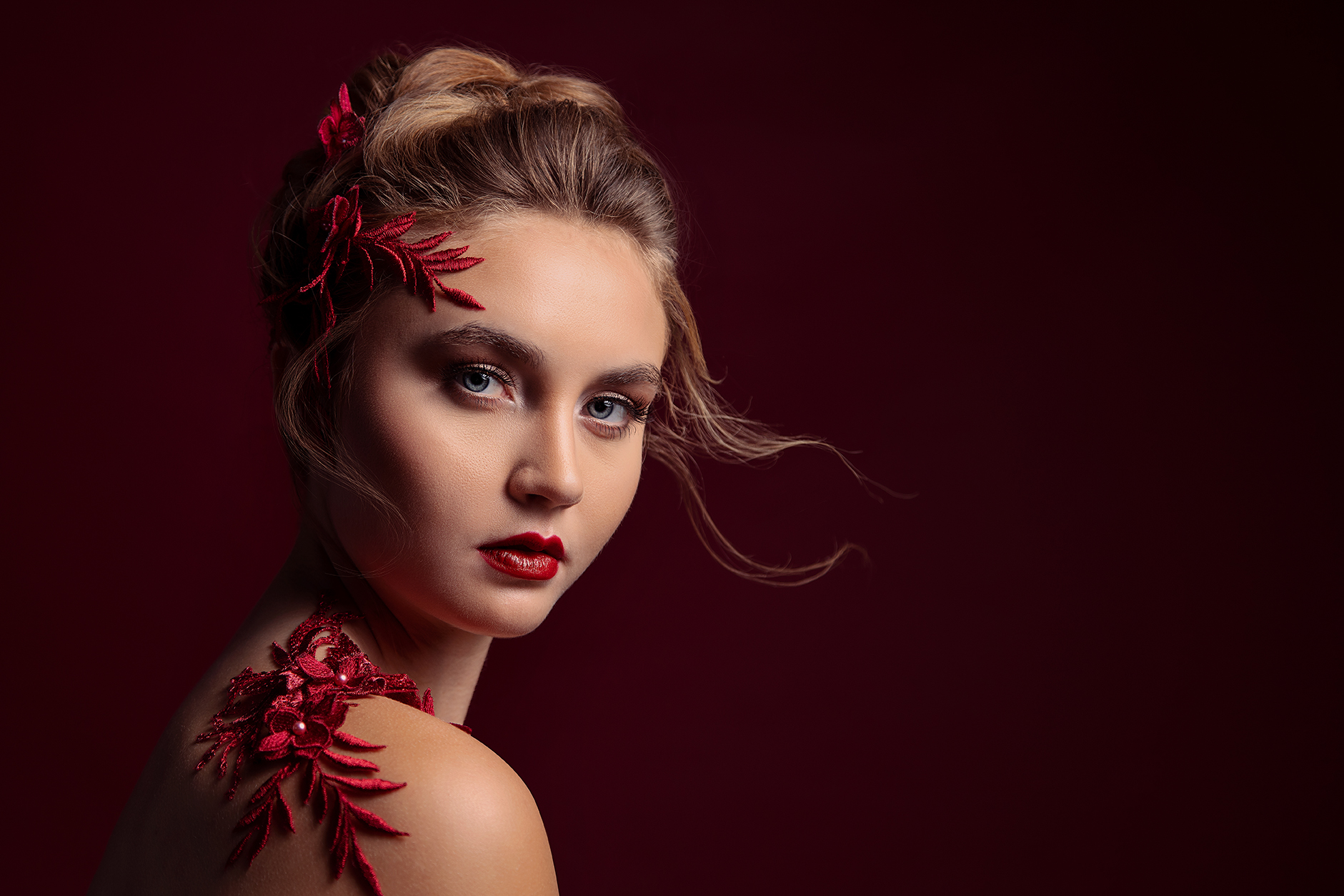 Wanting to take her creativity even further in the third look, Ashley was inspired by some of the dramatic photos shot using the Lindsay Adler Optical Spot. Partnering with Lindsay Adler to create this dynamic modifier, the optical snoot allows you to project focusable shapes of light onto your subject or background. It also offers a versatile range of small metal plates called gobos, to shield partial lighting and produce various patterns of light onto your subject.

Ashley also set the scene using the FJ400 with a blue color gel and placed it inside the 53” White Interior Deep Umbrella from the first look to add a soft fill light. She played around with initially placing the star gobo on the Optical Spot for a more creative piece to the shot and then decided on hitting her model with a more crisp spotlight look with the circular gobo. She focused it on her model’s eye to capture the sharp focus of the gobo with the lighter contrast of her fill light to make her eye pop.

This lighting effect paired well with the more stylized look Ashley was going for. She framed her eyes with glitter and jewels to catch the flash from the FJ400 and Optical Spot. 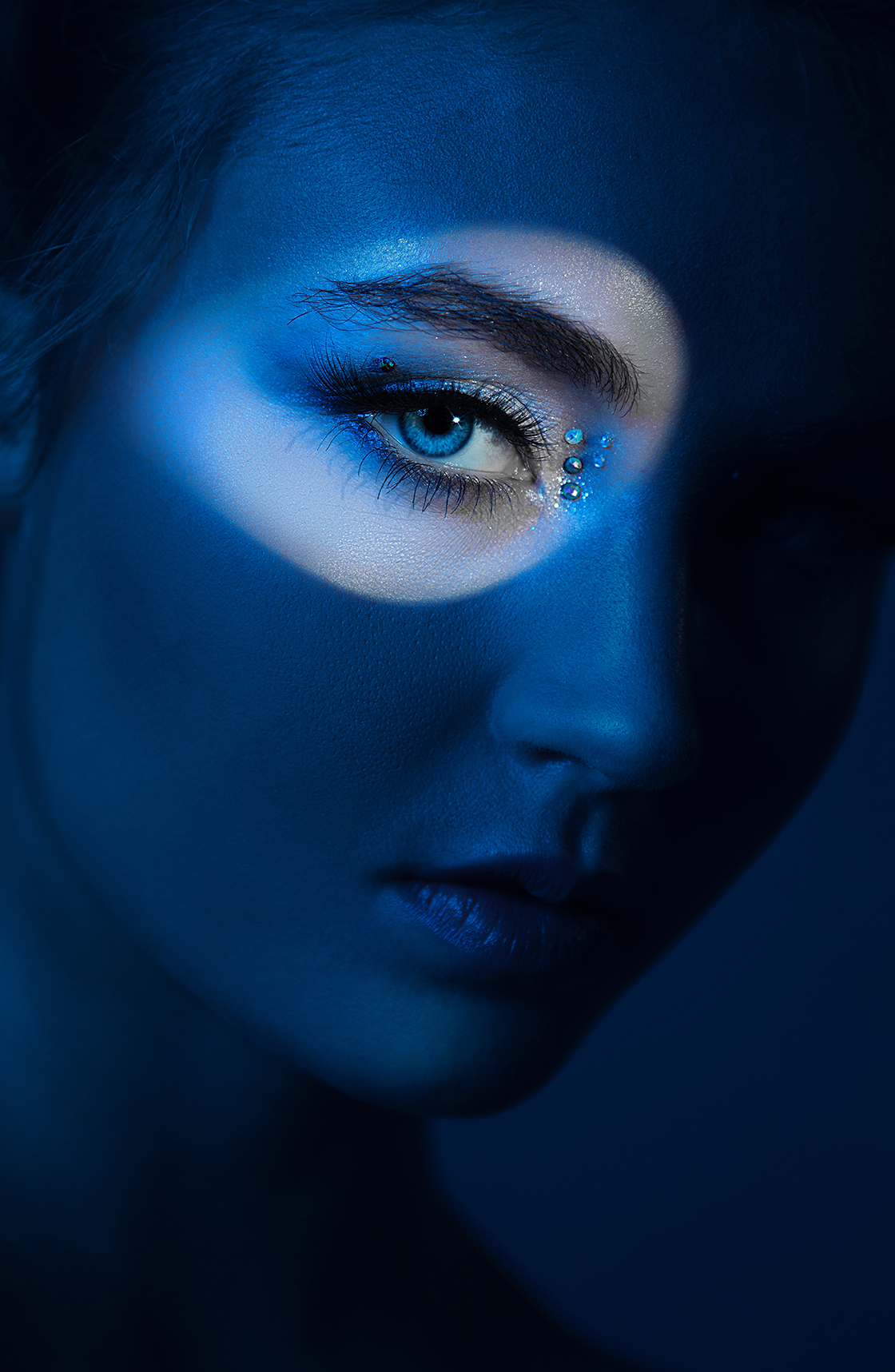 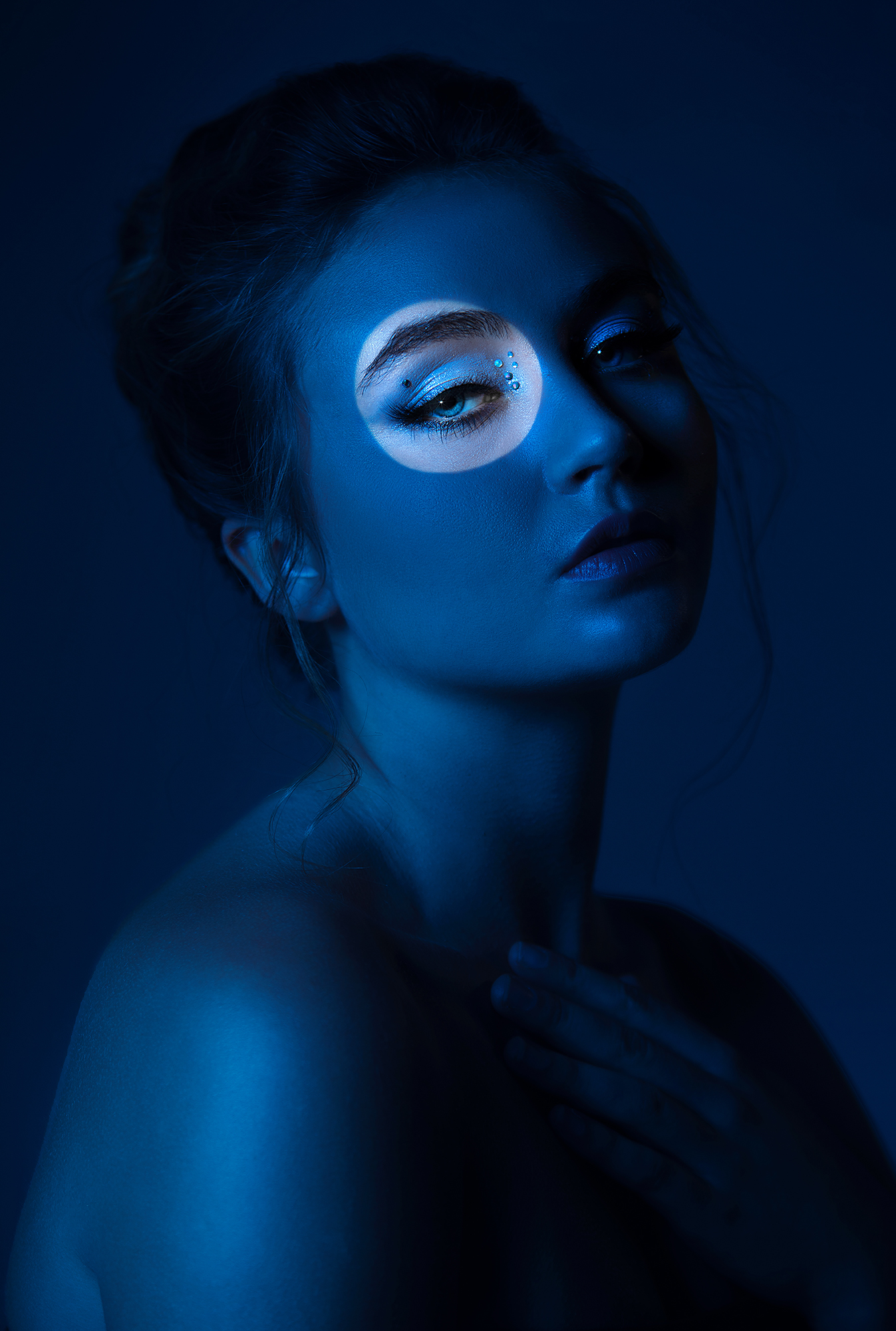 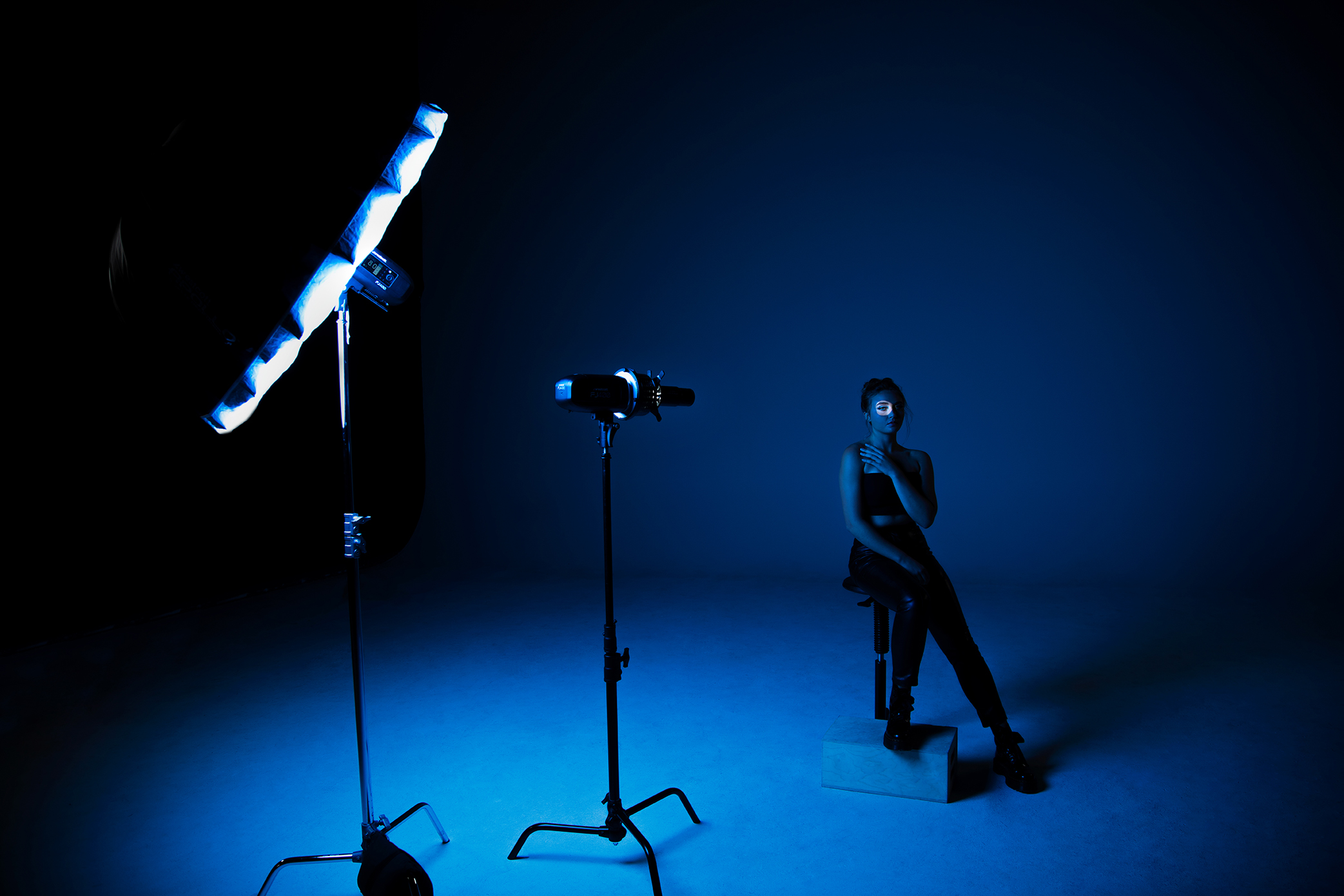 Throughout the three portrait looks, it’s clear that preparation is key for any photo shoot. Planning with mood boards and testing your lighting ahead of time helps to ensure the shoot flows smoothly and you come away with incredible images.