This article is courtesy of Louisville-based fashion photographer Clay Cook.

I’ve been there, standing in the middle of a field on a hot day with a scorching sun, mulling back and forth on how to capture a quality shot. In the back of my mind, I’m wishing for some cloud cover or an overcast sky to magically move in. A commercial client or art director doesn’t care what time it is, they just want the right image. It’s up to you to capture that image with the weather Mother Nature has dealt.

Like most photographers, I love an overcast sky which can be dramatic with strobes. But, I’ve found with these simple tools, you can replicate the look of a super soft strobe using the hard sun. With spring approaching and warm weather right around the corner, many photographers begin crawling out of hibernation into the wild world of “on-location.” I’ve been stuck in a “high noon” situation many times and have had to make it work.

There are several techniques to “make it work” such as shooting in a shadowed area, overpowering the sun with a strobe or filling in hard shadows with a silver reflector, but last year I stumbled upon an easier, softer option. This past month has been a wild ride; I’ve shot multiple editorials for multiple publications and have had a camera in my hand nearly every day. Thankfully, Westcott makes a few products at a reasonable price that have been game changer in my work. I’ve relied almost solely on these products for these shoots; the 5-in-1 Reflector and the Medium Scrim Jim Kit. Whether I’m in the studio or on location there hasn’t been a shoot where these tools have not come into play. 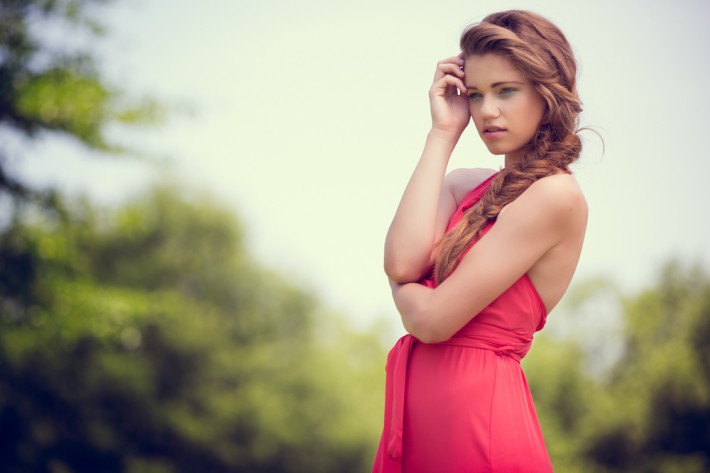 Last summer, I was approached by creative director and stylist Chris Caswell to shoot an advertising campaign for Heyman Talent Agency. The shoot involved a group of fresh faces and our location was a public park in downtown Louisville with little to no tree cover. Hair and makeup was set to begin at 9:00 am and, if time served me right, it would put us at the park right at 12:00 pm. Turns out, that is exactly what happened. Here I was… standing in the middle of a field on a hot day with a scorching noonday sun, mulling back and forth on how to capture a quality shot. I scoured the landscape for the closest tree cover or architecture. I happened to find coverage near the edge of the park, but unfortunately it was blanketed with sunspots from the light peering through branches and leaves. Frustrated, I was clearly out of options and I had to think fast before morale began its downward spiral. 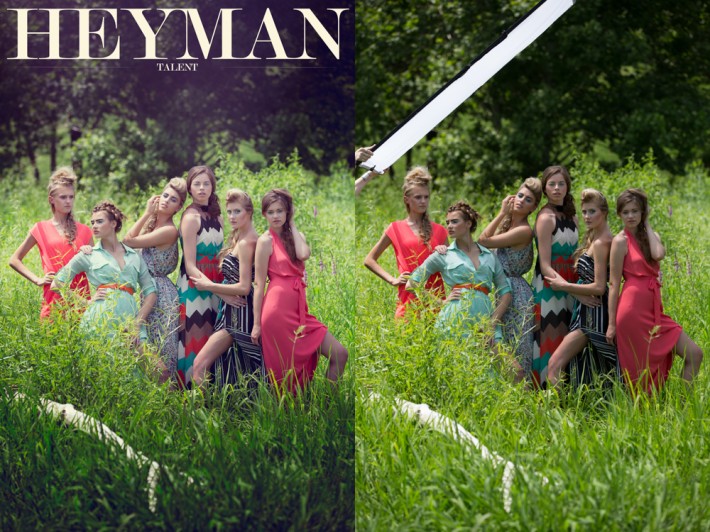 We’ve all seen the production videos of big-budget commercial shoots with giant 20′ x 20′ scrims covering the scene, which can be far too expensive and a logistical nightmare for a simple freelance photographer. And, most don’t have access to a grip truck, 20 sandbags, steel scaffolding and heavy duty tie downs. Fortunately, Westcott manufacturers a collapsible scrim called the Westcott 42” x 72” Medium Scrim Jim which I had, by chance, purchased the previous week. I hadn’t even broken it out of the box. We assembled the frame and gave it a quick evaluation, the results floored me and all my worries had been lifted. It seemed like magic or some form of sorcery, the 1/2 stop diffusing silk not only diluted the highlights but also provided a soft fill light. Without a doubt, the scrim saved the day and I didn’t even use a single strobe. The campaign went on the become a success for the company. 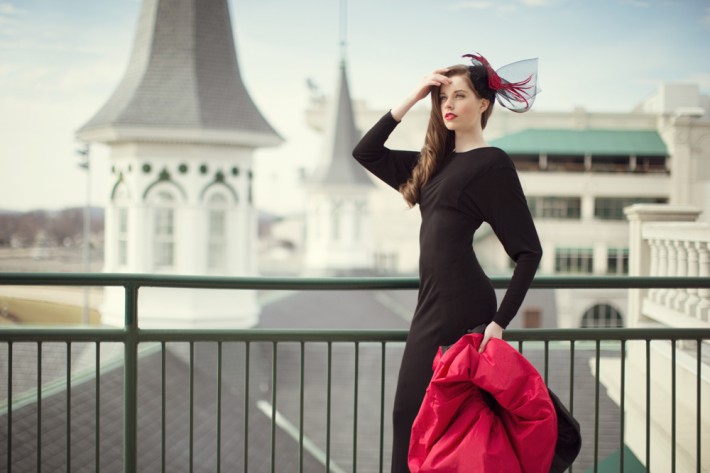 I also rely on a 40” 5-in-1 Reflector which contains a translucent white panel and a removable reversible zippered slipcover to reflect silver or gold light onto your subject. I remove the slipcover and use the 1 stop diffusion panel to cut the sun. If you’re trapped in a lighting nightmare, using shadows on the ground, find the path of the sun and raise the panel directly in between that path and the subject. You’ll see the hard-shadowed “raccoon eyes” disappear, the blown highlights soften and the frame transform into a beautifully lit portrait, resembling a painting. In some cases, I’ve mixed and messed with double and even triple diffusion using these tools. I’m a strong advocate for experimentation, DIY rigs and I’ve gone as far as duct-taping two diffusion panels to the frame of the scrim and mounting it over a subjects head. The light closely mimics that of a boomed strobe with a 60″ double diffused octabank. 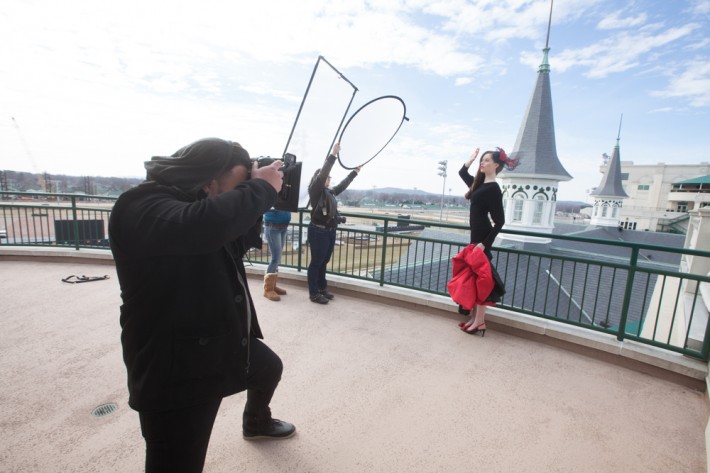 Unfortunately, in many cases, you have to be quite close to the subject because your assistant just doesn’t have the reach. Therefore, compositing is usually involved when I use scrims, however, they can be easily cloned in Adobe Photoshop or masked out with a solid background shoot. That is why I always recommend shooting with a tripod when compositing. Also, it also can be tough without an assistant, but there are options such as a Illuminator Reflector Arm, which will hold a lightweight reflector in place. But, make sure you have the proper sandbags to stabilize the stand to the ground. With all the overhead front weight, a slight gust of wind will blow it over the stand with zero resistance. The last thing you want is a reflector smacking your subject’s head. 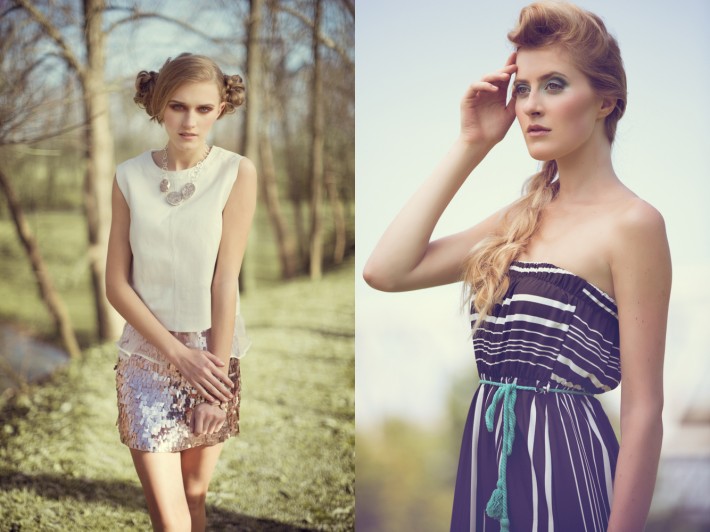 Once upon a time, not that long ago, I was frightened to shoot at the time between 11:00 am and 3:00 pm. But, armed with the proper gear, I love shooting at noon… I have even recommended it. So, the next time you’re standing in the middle of a field with a scorching sun, praying for some cloud cover, grab a Westcott Reflector or a Westcott Scrim Jim and prepare for yourself for what you’ll see on the back of the camera.

To see more of Clay’s fashion/commercial photography, please visit his website or check him out on Facebook.

Collapsible 5-in-1 Reflector with Sunlight Surface (40")