We are working in an era where technology is fueling our passion to create powerful multimedia. However, the market is so saturated with constantly evolving technology that, in my short career, I’ve found that the gear purchases I make are often completely obsolete for me six months later and almost certainly one year later (here’s where you picture a club full of manufacturers smoking cigars and drinking scotch that I’ve paid for).

Today, I’m six months down the road from a purchase I made this year at NAB, and I’m just as excited about it today as I was then. It’s the Ice Light from Westcott.

At some point in my transition from photographer to cinematographer I began having the opportunity to work with gaffers. I began to study light not in fractions of a second but in continuous thought. On bigger shoots that I gained employment on, I began to learn what it looks like when a subject is actually properly lit.

Sadly, if you work for a newspaper — there is no gaffer. If you are a cameraman working for TV, you won’t have one either, although you might have a larger wallet and a couple more arms to help carry more metal and bulbs around.

Regardless of what changes in our camera technology, light is still the most important thing in creating beautiful and powerful images. We continually gain greater ISO capabilities from our cameras, but this doesn’t change the beauty of actual light.

Now, when I see good video journalism, the thing that I admire most after the story or narrative is good lighting. Making nice frames is easy. I honestly don’t understand how Newsshooter.com’s technical editor Matt Allard gets his lights everywhere. But what I do know is — he’s not relying on his camera’s low light sensitivity capabilities to make beautiful pictures.

Back in one-man-band world, what are you to do? If my location and assignment allows for it, I like to use 1×1 LEDs. However, I do so much remote location work that an extra bag with three panels, three stands and three v-block batteries isn’t always an option. Shooting interviews without light looks dead and flat to me. You could attempt to only shoot during golden hours or hope to get lucky with some nice window light — but there’s no guarantee. Lighting in remote locations with small budget productions is one of my greatest challenges as a filmmaker.

While some small LEDs are powerful and certainly fulfill a purpose, for remote location shooting where backpack or luggage space is a concern, I’ve become extremely impressed with the Ice Light. Compared to a small LED panel, it adds only a small amount of kit to my bag, but sheds a whole lot more light on the situation (pun intended). 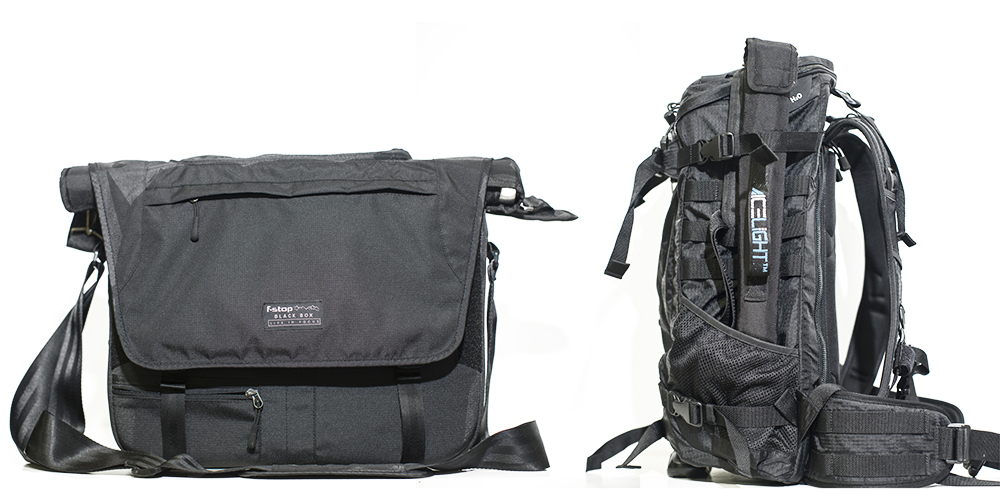 The light is small enough to fit on the side of a backpack or across the laptop bag that I bring on a plane. Above, you can see the Ice Light on my f-stop Loka and District 15, which is the width of a 15″ MacBook Pro Retina. The LED is light enough that it can either be mounted to my camera, tripod or Manfrotto’s smallest and lightest light stand, which fits easily with my tripod into a bag. The light has two quarter inch threads so there are some creative mounting options (i.e. LED on LED).

You might say: ‘Hey, my LED panel fits just fine at the top of my camera and fits into my bag easily, too!’ Well, yes, so does mine. But what they don’t do is give you the spread and diffused look of the Ice Light. Most LED panels have a fairly small spread. Sometimes they make me feel like I am just carrying around high powered flashlights that require defusing. In comparison, the Ice Light has a 72-degree-wide beam spread of light. This makes it possible to wrap light around your subject’s faces and creates a soft fall off that I don’t get with small LED panels. If you look at the first and last interviews in Breadwinners (the top video of this post), if the Ice Light is on an arm, you can position it to control that falloff as well. Or in Forsaken (the middle video of this post) I’ve positioned it to light the subject’s whole body relatively evenly. 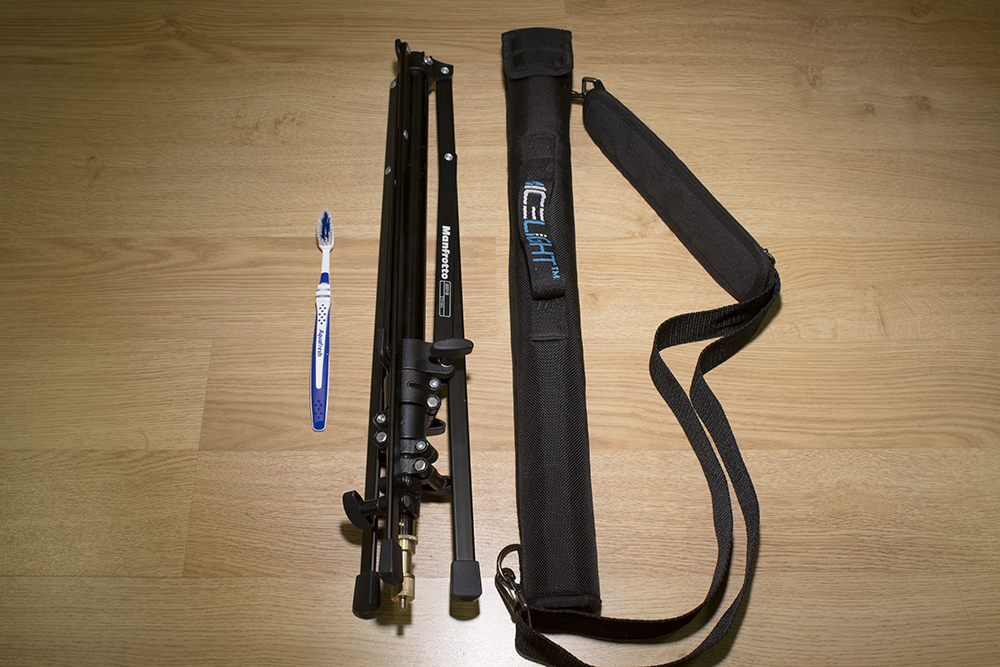 Earlier this year, while reviewing Canon’s C100 I wrote about the first of three reporting trips to Burma I’m taking this year.

In the three videos you see here, made on my second trip, most subjects are lit with the Ice Light. As normal in these situations, we are working on the fly; it’s about rocking up and shooting before someone stops you, or someone decides they shouldn’t be talking to you. This light can be set up on a stand in about 30 seconds.

Still, in some situations setting up a light is not practical at all and will only get you in trouble. For example, setting it up before trying to interview an 11-year-old waiter working in a tea shop – before his boss finds out you are asking about child labour – might not be possible. However, you can if you are interviewing a ten-year-old who collects bottles from the streets seven days a week and lives in shack above a swamp.

The lighting in these videos is so much better than in those from my previous trip. For comparison, you can see those videos here.

To be fair, there are a couple of downsides to the light, the biggest of which is the battery. The built-in battery lasts only one hour, which is not enough to get me through one day. However, Westcott does sell an extension battery, which will give you two-and-a-half hours more use. Between these two batteries and the availability of an electrical outlet, I haven’t run into a situation where I’ve run out of power.

Another downside is that the light must be carried on planes (you can’t check it). Westcott says these batteries cannot be stowed in a plane’s hold or the batteries could explode (Note to anyone thinking of buying and flying with one of these: don’t use those words when explaining to a flight attendant why they can’t gate-check your bag… it won’t end well).

While I end up replacing many of my purchases with better or newer items within six months, my need for light will always be there. I know this won’t be my answer for a studio or commercial lighting scenario, but for field video journalists working by themselves, this light is priceless. 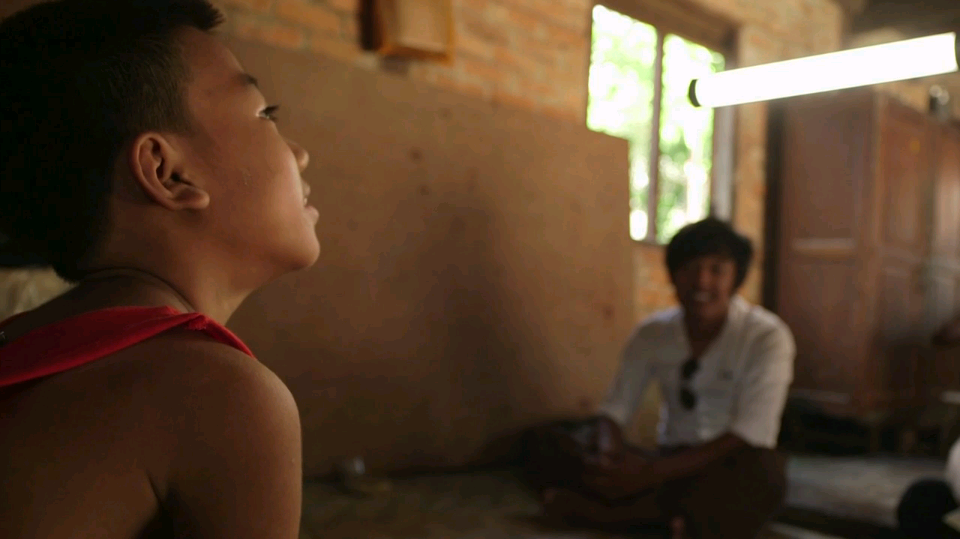 Jonah Kessel is a Pulitzer prize-winning visual journalist currently residing in China. He covers China for the New York Times’ video department, is a contributor to News Shooter, and has been featured in publications such as the The Wall Street Journal, CNN, The Los Angeles Times, and The Economist. Jonah has produced work for corporate clientele including Coca-Cola, British Petroleum, The World Economic Forum, The Jane Goodall Institute, Prada, and Save The Children. His experience, expertise in visual media, and cross-cultural knowledge  have landed him appointment as a visual consultant for the United State’s State Department and the Creative Director for China Daily, the Republic of China’s National English Language newspaper. Jonah has won over 40 prestigious national and international awards for design, photography, and video.

You may watch behind-the-scenes footage of this eye-opening documentary, Myanmar Emerges, above.