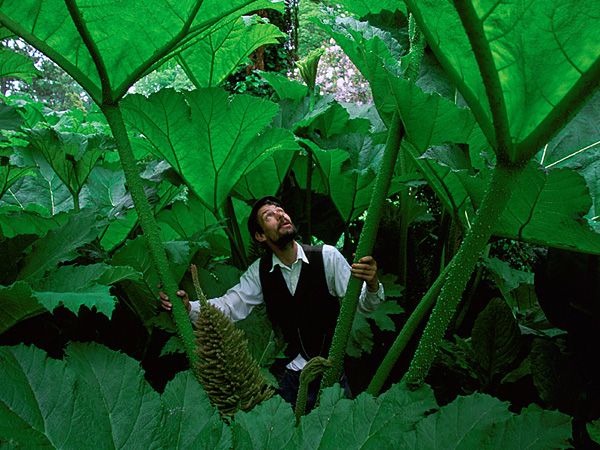 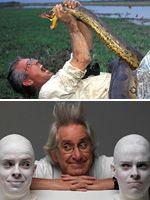 It’s good to have a little perspective – to know where you stand and just how big (or small) your world and the things in it are. Most pictures we see include something we recognize – a person, a house, a car, or something else that we already know the size of. Like leaves. We think we know what size leaves are. And usually we’re right. But the man in the picture above makes us go, “Whoa, those leaves are really huge.”

Even if the rest of the photograph is of something we have never seen before, one familiar object gives our minds a clue and we can then easily work out the sizes of everything else. That’s why you often see pictures of fishermen holding up their catch – we know how big the fish is by comparing it to a human body. It’s why landscapes are often shot with a person gazing off into the distance. And it’s why jewels, archaeological discoveries, dinosaur bones, and the like are often photographed with a ruler, a coin, or some other easily recognizable item. Scale.

But photographs can be deceptive, especially in this age of easy photo manipulation. Take diamonds, for instance. Sure, quality and cut are important, but with diamonds, size really matters. If you see an image of a diamond all by its lonesome, you have no way of working out how big or small it is. You need a reference point. Like this:

If you want to show teeny diamonds, a quarter isn’t much good – you would barely see the diamond next to it. So use something else recognizable, like a strawberry. And to show off a really big one, hands and faces are useful.

But it’s not just jewels that benefit from a little perspective. Most of us aren’t really familiar with the size of baobab trees or the spiky sisal plants growing around the one in the image below. The person standing next to it (at right) lets us know just how big the tree really is.

And the doll’s head at below left could be a foot high – or two feet or fifty feet. There’s no way to tell until you give it a context, as with the image at right. 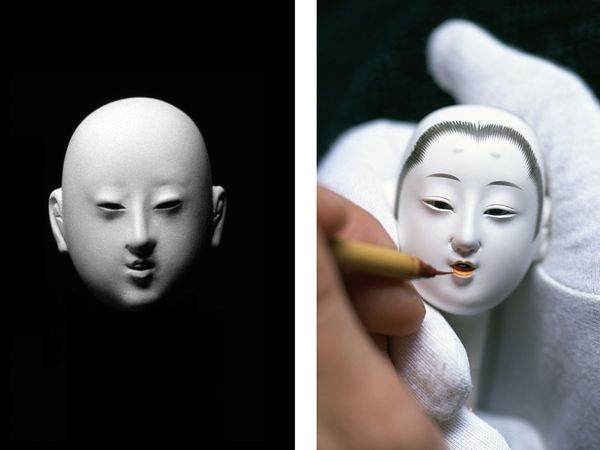 Landscapes often include elements we intuitively know the size of, like trees or fences. Those elements are usually enough to give scale to the image. But if you’re shooting in a location that doesn’t have much to grab onto, like a desert, you might wait for someone to come strolling along or ask a friend to stand in a certain place. Not only will their presence give the picture scale, but it will also give the viewer something to concentrate on, a center of interest. Looking at the picture below, for instance, we would have a hard time figuring out the size of the sand dunes without the figure. And, quite frankly, we probably wouldn’t want to spend a lot of time looking at the image. Without the figure, the picture is pretty bland and our eyes don’t know where to go. His presence transforms it from being a snapshot to being a photograph. 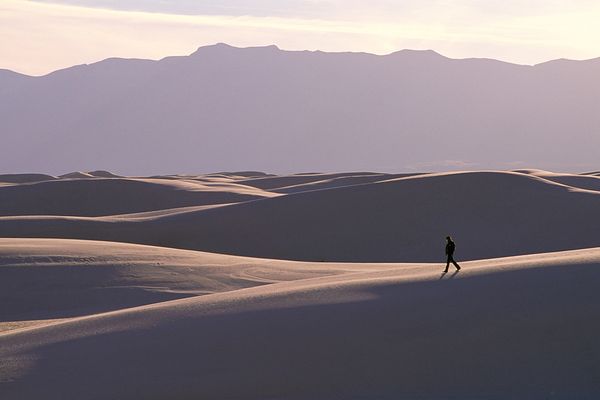 Showing scale is especially important when you’re photographing monuments because the whole point of such buildings is that they’re, well, monumental. So you need to show it. The man on the camel is dwarfed by part of a Giza Pyramid, the size of which is accentuated by the small size of the tall buildings in the background (it helps that they’re pretty far away). In the image at right, the enormity of the hieroglyphic-covered walls is made evident by the men standing at their base. 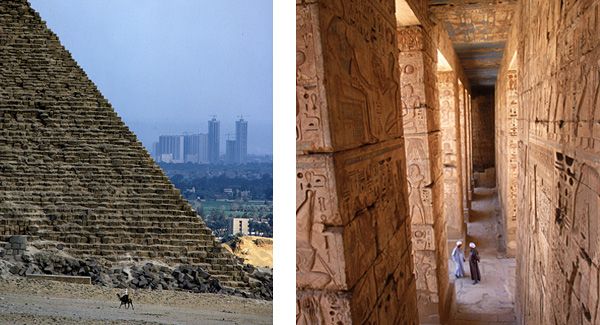 There are also times when you might want to use scale to emphasize a point. In the image below, I wanted to capture the height of the Mississippi River is as it passes by the French Quarter in New Orleans, getting across the idea that the city could be threatened by even slightly rising water. (I was working on a story for National Geographic that was published a year before Hurricane Katrina.) By using a telephoto lens (300mm f/2.8 in this case), I could compress the image so that the freighter is jammed up against St. Louis Cathedral. The people along the bank give the whole thing scale. Because the ship is closer to the camera than the cathedral or the people, its size is made larger and it really seems to loom. I call the picture “Darth Freighter.” 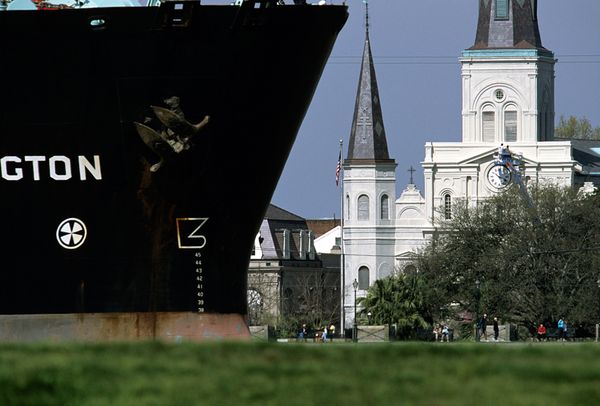 Notice also that depth of field in this image is important. In order for it to work, both the ship and the cathedral had to be sharp. But I needed a high enough shutter speed to freeze the freighter.

Luckily, they move slowly. Depth of field is usually important when showing scale, as you want the reference element to be clear – if it’s fuzzy, people will intuitively feel that it might not be giving them the correct information.

Whenever you’re shooting a landscape, a monument, an insect, or a jewel – anything that you want to convey the impressive size of (whether its impressively big or small) look around your frame carefully. Does it include something that will give viewers an indication of scale? If not, move around until it does or find some other way to work in a recognizable element. Not arbitrarily – it needs to work with the tone and composition of your photograph. If you want us to feel it’s really big or small, show us. Get a little perspective on things. Just think of how it made all of us feel the first time we saw a photo of the whole Earth floating in space. It changed our perspective.

There are MILLIONS of articles out there about photography – plenty of good ones, and then there are some AMAZING ones! With that said – we like to highlight the best ones we find. This article was posted on National Geographic’s website by two photographers: Cary Wolinsky and Bob Caputo. These two individuals have a combined 64 years of experience photographing stories for the National Geographic and other publications.