When I saw the Zepplin showcased at this year’s WPPI Convention, my creative juices began brewing on what project I could create to give this bad-boy a run. As I unpacked my Zepplin, just by looking at the silver inner baffle and the option of multiple scrim diffusers, I could envision the quality of light I might get. In my personal work and for my style of lighting, I prefer to produce images with more pop (specularity) and a higher contrast ratio. This was going to work just fine.

I gathered my team for a creative day at the studio, which I often recommend to any photographer. It keeps your skills up to par, plus I’d rather learn in practice than on the field. I’ve been wanting to do a photo shoot merging beauty and mystique, so we decided to have this as our base theme. I met with my makeup artist on the looks I envisioned and she also provided some of the wardrobe ideas. Through the years, my team has been a huge contributor to the success of the images we produce. Creative people are great to bounce ideas off of, taking an image from a great shot to a brilliant shot. Once we had the concept, makeup, and attire handled, it was up to me to determine the fashion in which I would use the Zepplin. 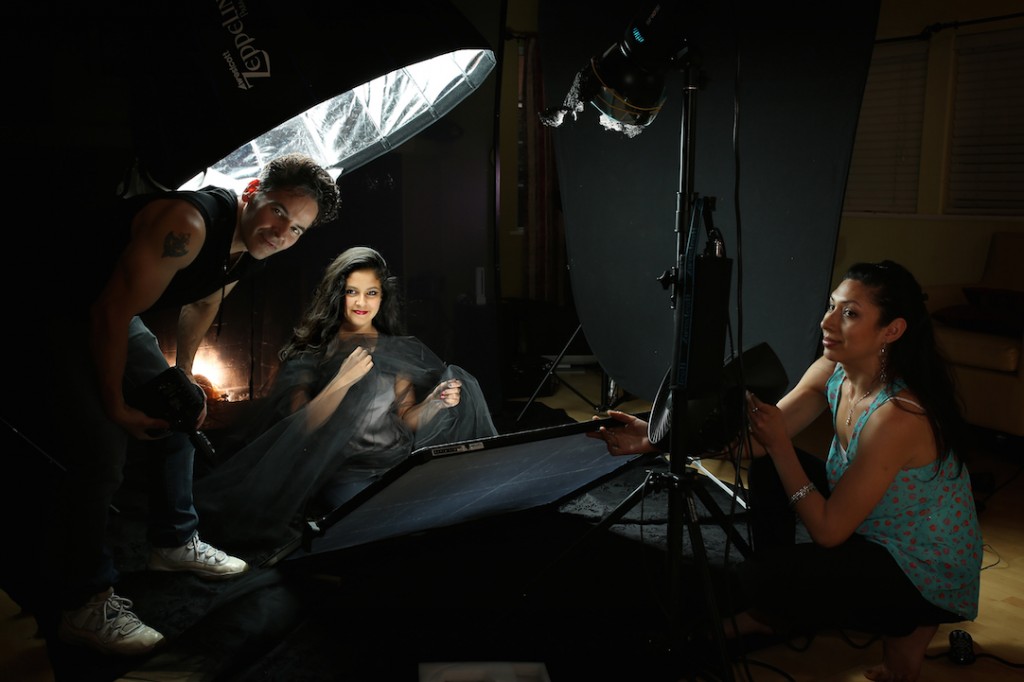 The most predictable approach in using a parabolic softbox of this nature, is to place it in a forward fashion somewhere in front of my subject. Because of the deep construction of this parabolic softbox, I placed my subject encased by the Zepplin, which was set a foot behind her extended by a Westcott Boom Arm. I kept the 1/2 stop inner diffusion panel in place to soften the light slightly while still maintaining the specularity quality. In some instances, I also used the 1/2 stop outer diffusion pulled halfway back, to soften the light falloff. This also created a nice transition on the black fabric. 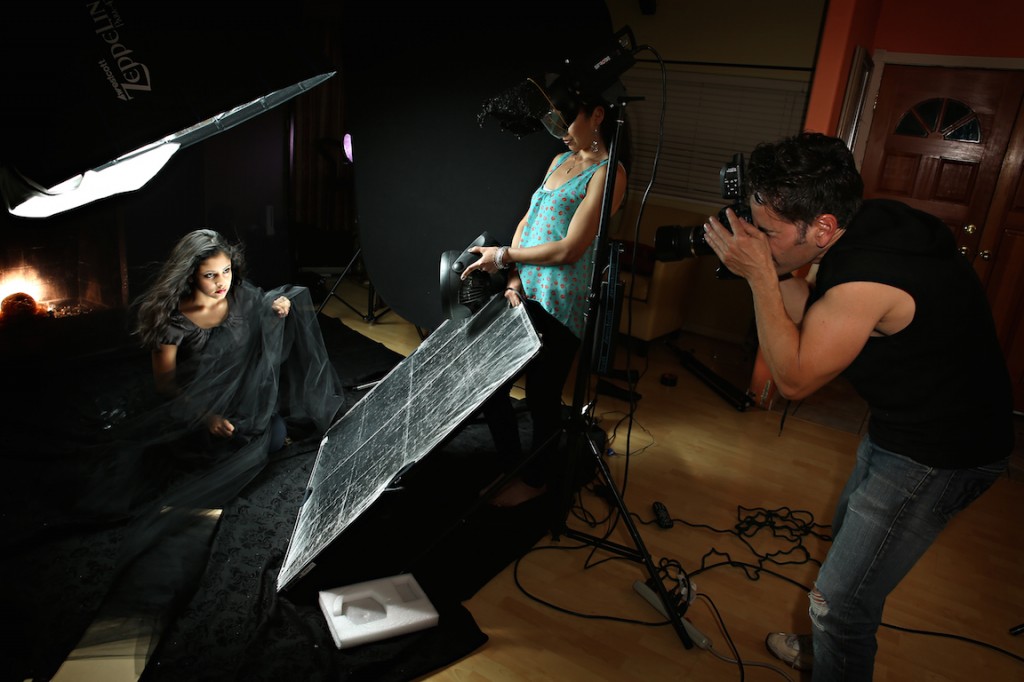 Positioning your light in this fashion serves multi-purposes. Firstly, we use it as our main light, and secondly as our hair light. The quality as a hair light is very soft, with a wrap around quality that falls off onto shoulders, serving as an accent light as well. Since the light is set above the subject, it sets the eyes into shadow. To solve this, I placed a silver Scrim Jim directly in front of subject, opposite the Zeppllin as fill. I used silver to maintain the same quality of light as the main light. The reflector was tested from a foot in front to three in front. This allowed me different looks, with the ability to play with various looks. 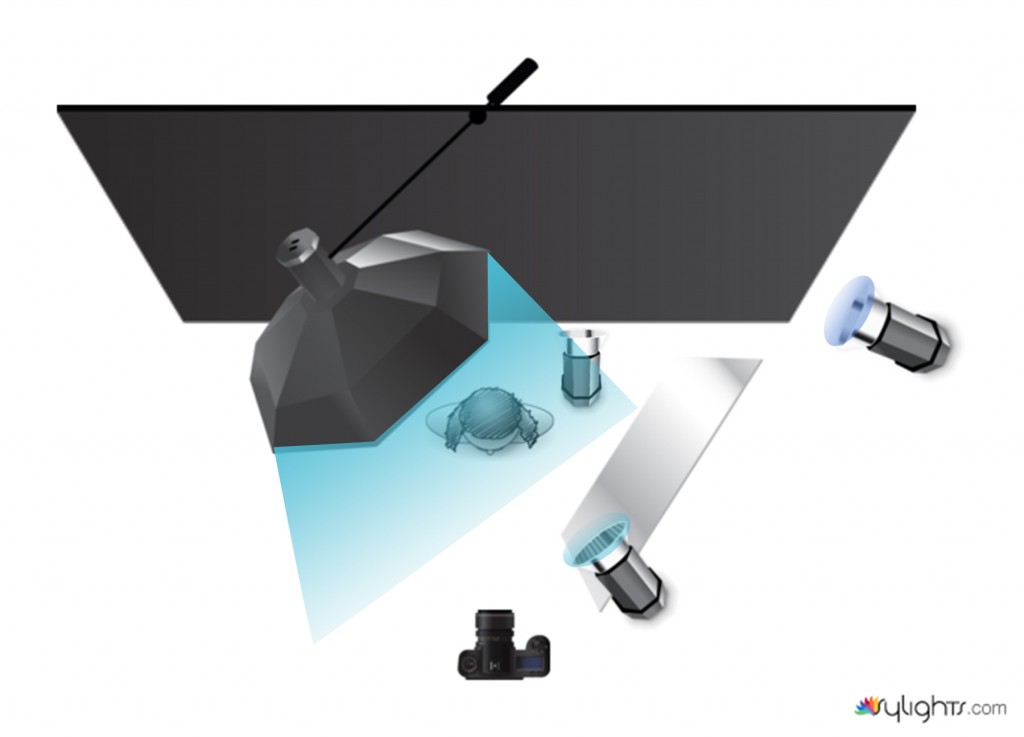 The main light was set on a Strobe Flash at 3/4 power, approximately 400 watts. This metered at F16. The Scrim Jim bounced light back to my subject which metered between F8 and F11. Another option I experimented with, was using another Strobe Flash with a  10 degree grid, and directed to subject’s face as fill. This light was metered at F5.6. I placed my subject in front of a fireplaces, surrounded by candles on the floor. I placed a large 92×92 Scrim JIm equipped with a black net. This I use often to catch light, while also softening the textures and focus behind my subjects. I Placed a small flash inside the fireplace with an amber Rosco filter, and powered the light between F8-F11. All the lights facing my subject were used with a Rosco CalColor Cinegel #4330 (Cyan). This promoted the mystical effect on the subject and scene. The final exposure for most of the images, were shot at 1/30th second @ F16. ISO 100. The slow shutter speed was used to capture the candles and movement in the fabric. 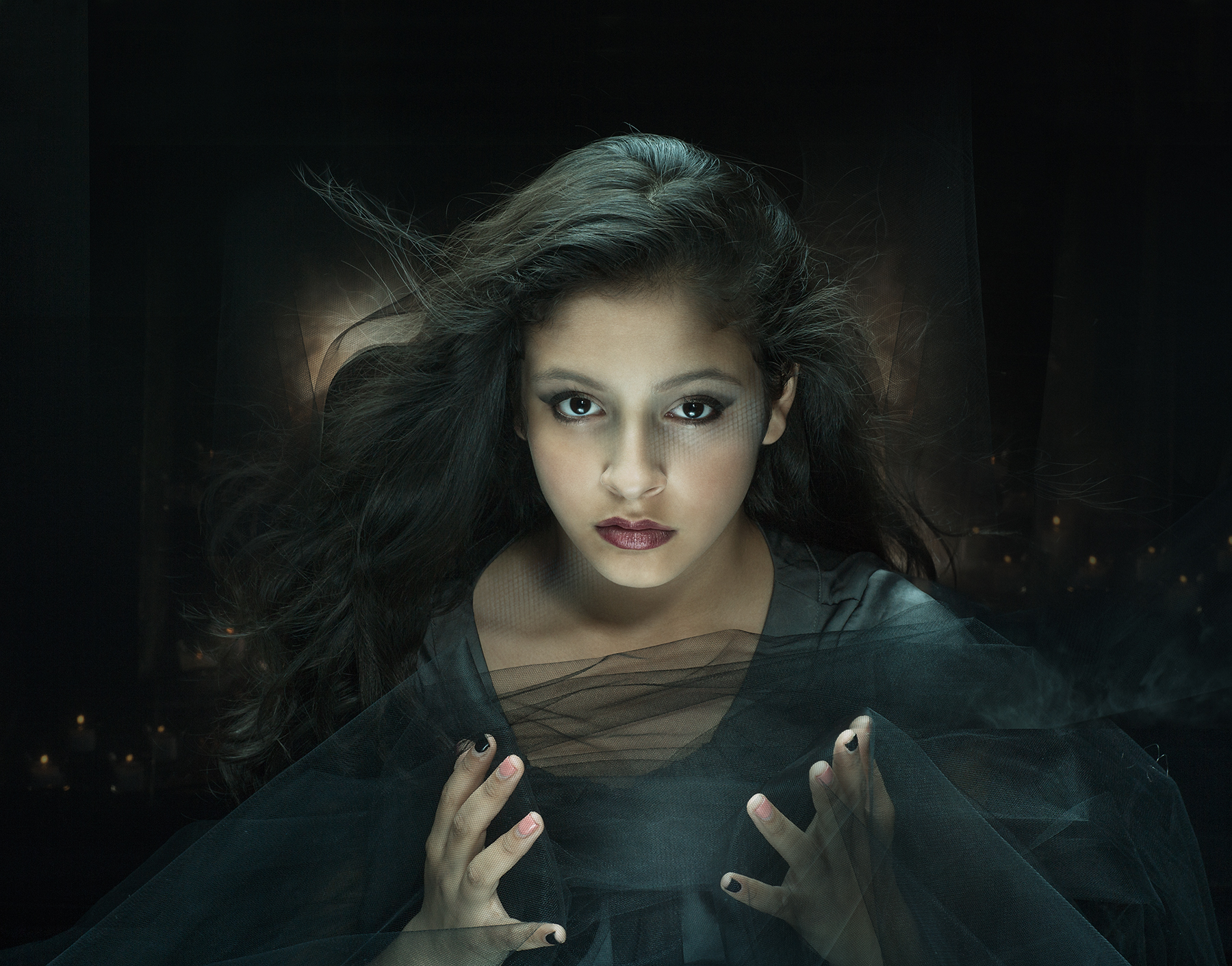 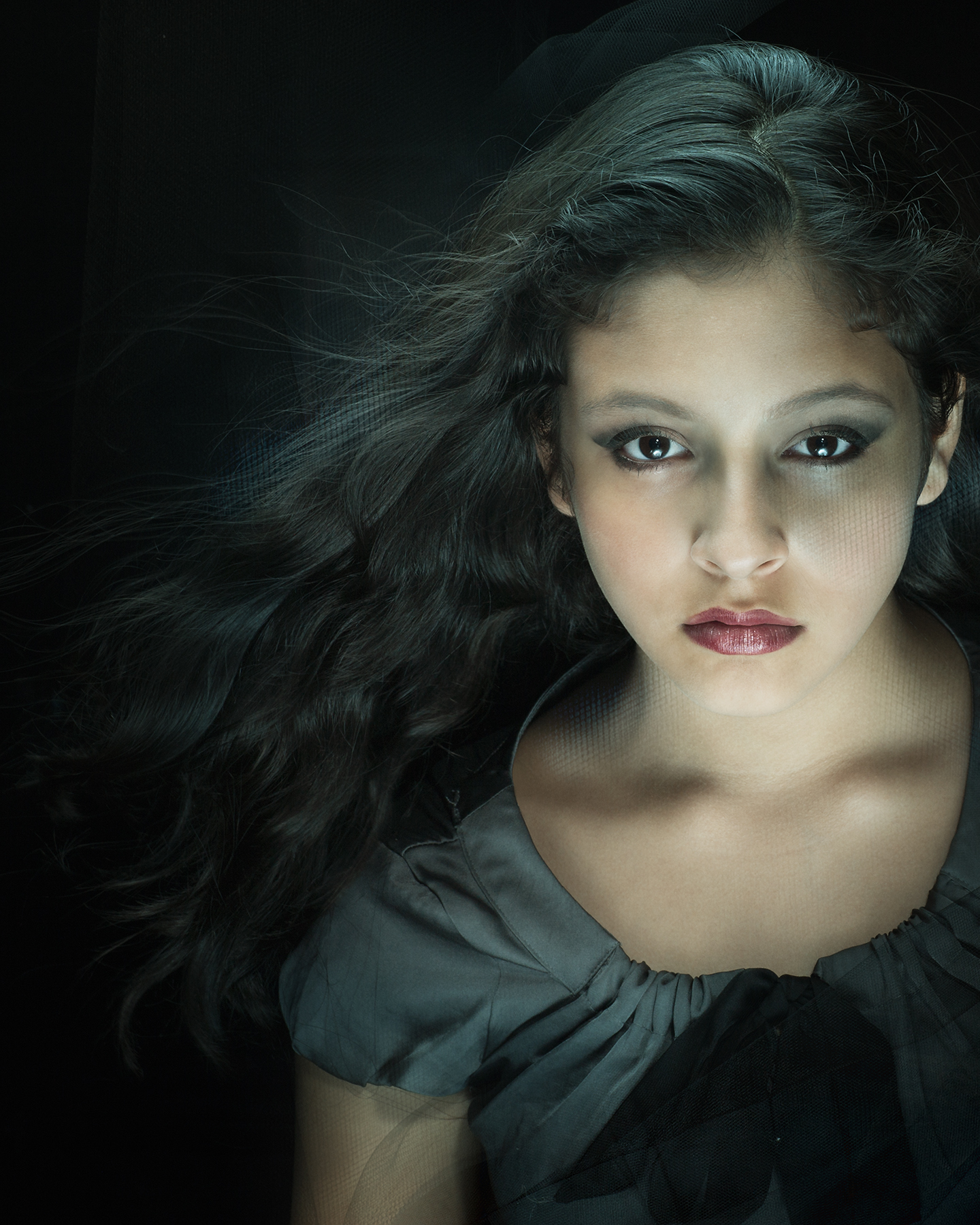 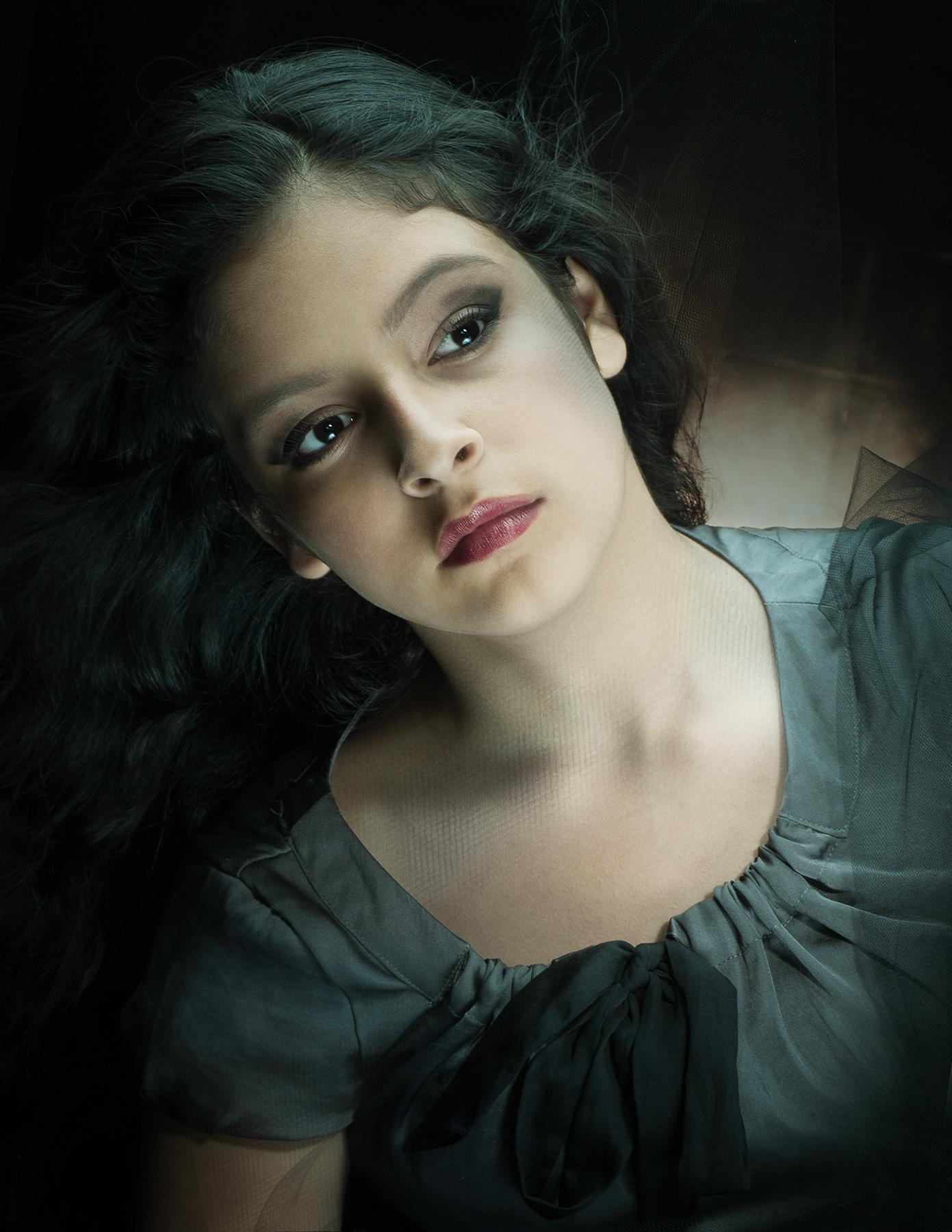