I must admit, I’ve never photographed a band before. Especially for something as important as official promo images that’ll be used for almost everything a band can think of (posters, album art, show banners, website). What scared me most is figuring out an interesting way to position multiple people. Luckily the guys from Birthday Boy only consist of three members… manageable for my small studio space AKA my unfinished basement (: 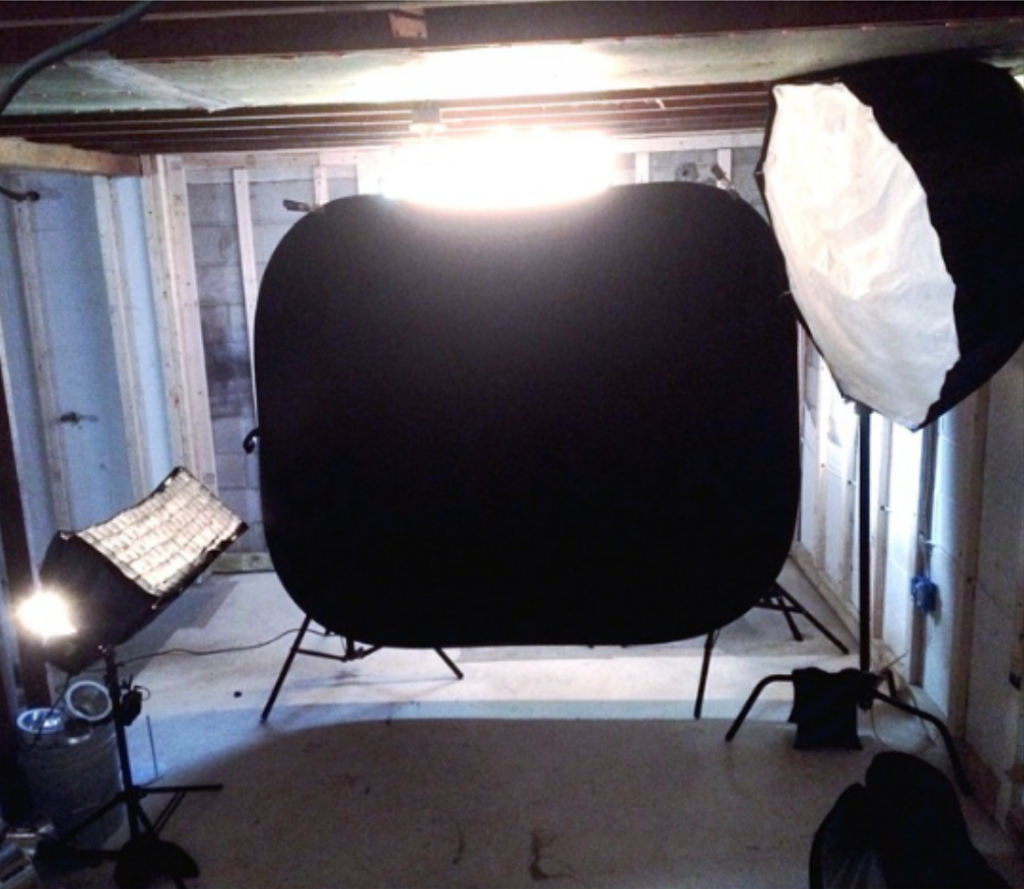 So here we have most of what I used, a Westcott black and white reversible 6×7 backdrop … this thing wraps into a small hula hoop-sized bundle of joy which makes my life much easier when packing/unpacking. My original plan was to shoot with the Apollo as the my light, I was thinking something along the lines of three dudes walking from a burning car … let’s just say I’ve been watching a lot of actions movies. 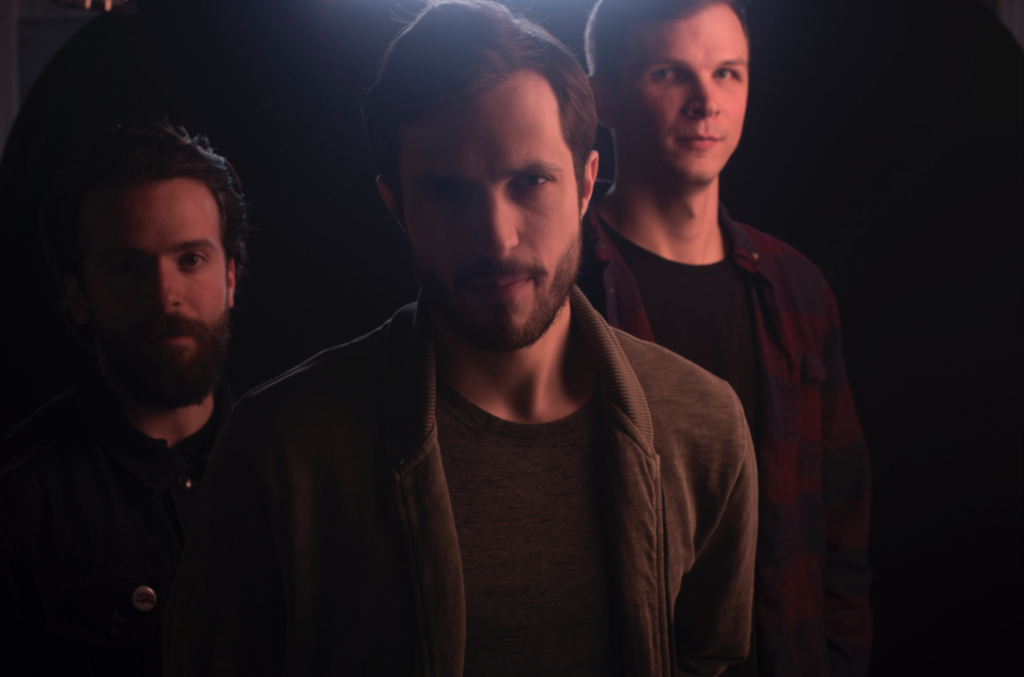 Boom! The light goes off and what I thought would be an epic shot left me less than thrilled. Time for new plans … 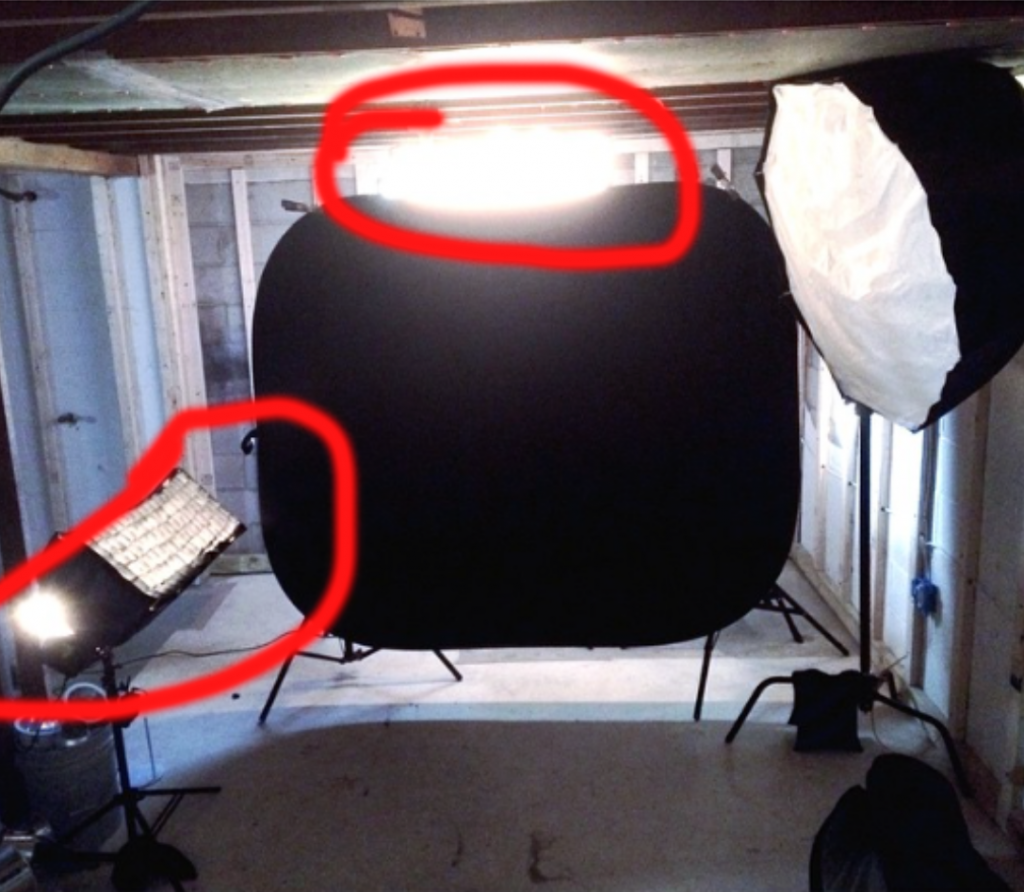 To the left I’ve got a stripbank with a grid on it, this will give me the ability to aim it more exactly at my subjects. The second circle is another stripbank, which is half flagged by the backdrop. There’s no grid on it in order to give me some fair (I like to call it bloom) into my camera. I ended up moving the gridded strip bank to the camera left side near my backdrop in order to light them more evenly. 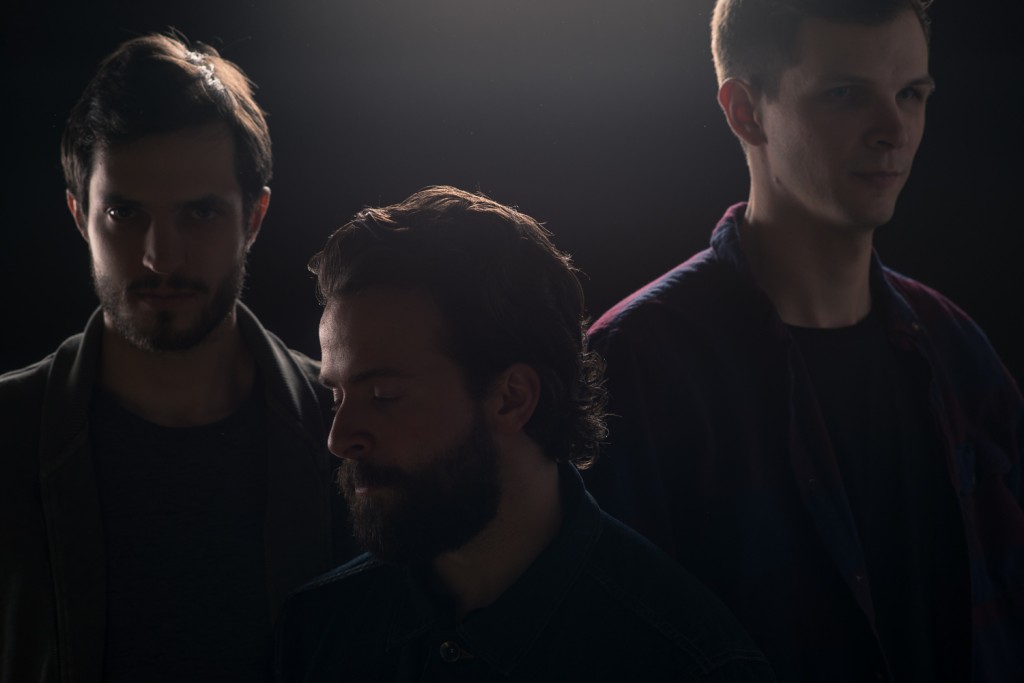 ….now we’re talking.
The edge light from the strip bank gave me readability on everyones face, and now I’ve got the blooming effect from the backlight working perfectly. Dan, the band member on camera right side is actually being filled by a simple white wall in my basement that the gridded light is bouncing off of. Happy accident. 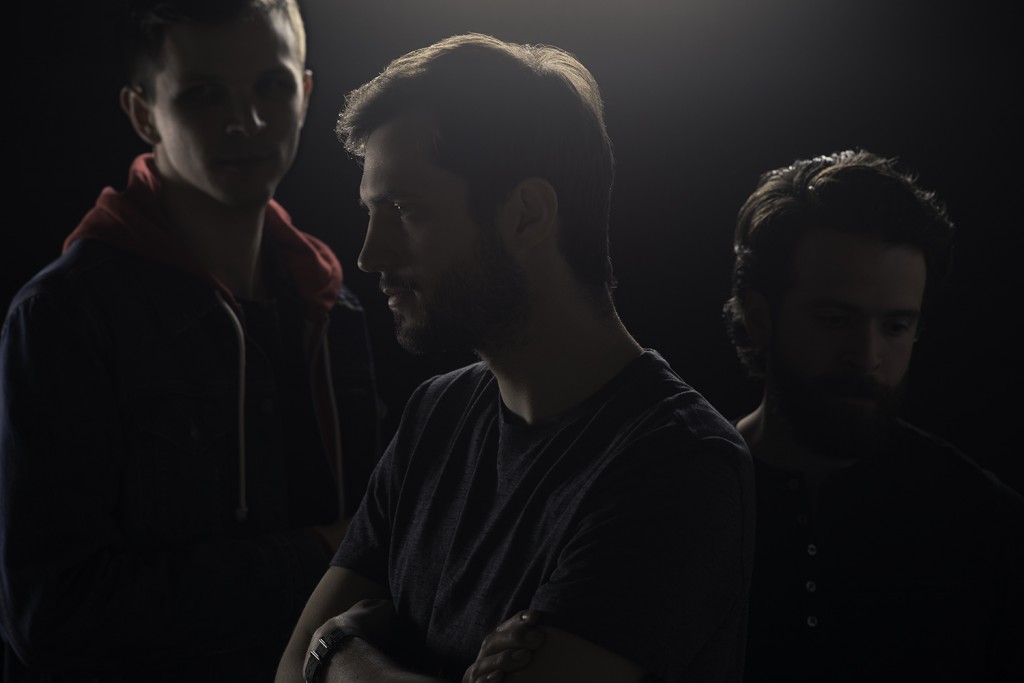 I moved the band members in many different positions. Just because the band picked their own spots doesn’t mean I’m tied to any particular positioning. In my earlier years of shooting, I’d often get someone in front of my camera and whatever they did first I just went with, which is a mistake that I’m glad I’ve finally corrected. Ask your subjects to move and (most) will be happy that you’re giving them options to choose what’s best (you’re also giving yourself more options in your edit).
This is one that I sent to the band. Their lead singer, Mike, is now front and center … this is something that I felt just made sense. I’ve heard much debate on changing the lead singer to give a different look to your images, but especially for up and coming bands like Birthday Boy, I felt it was my job as a content creator to let them know what I felt looked best.

After this we took a five minute break to let the band relax while I set up the next shoot. Always keep in mind that your subjects are your guests, even though I’m hell bent on getting a great image, their time and effort is just as labor intensive as mine. So give them time in between to do whatever (hang outside, grab a coffee, or a snack … you did bring drinks and snacks to the shoot right?) and let them chill out a bit.

Our next set up is the same gridded strip bank (which was horizontal, but is now vertical) and a gridded Apollo Orb. This was my favorite stuff from the shoot. The members David, Mike, and Dan really brought out their best for me while I was directing them, which made the portrait session a blast. Here are the results … 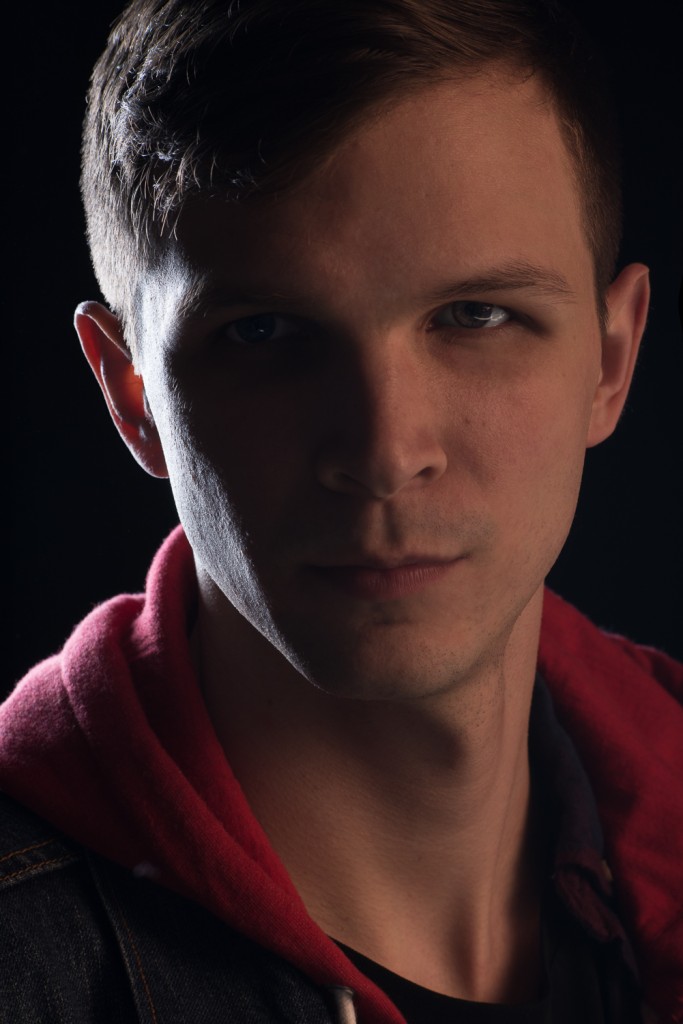 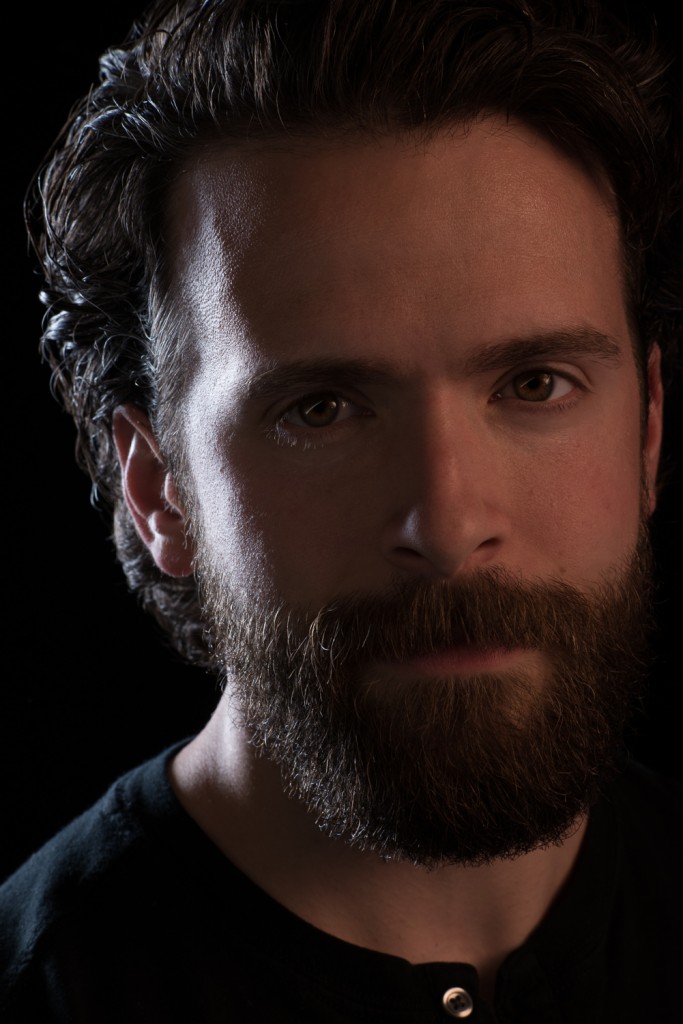 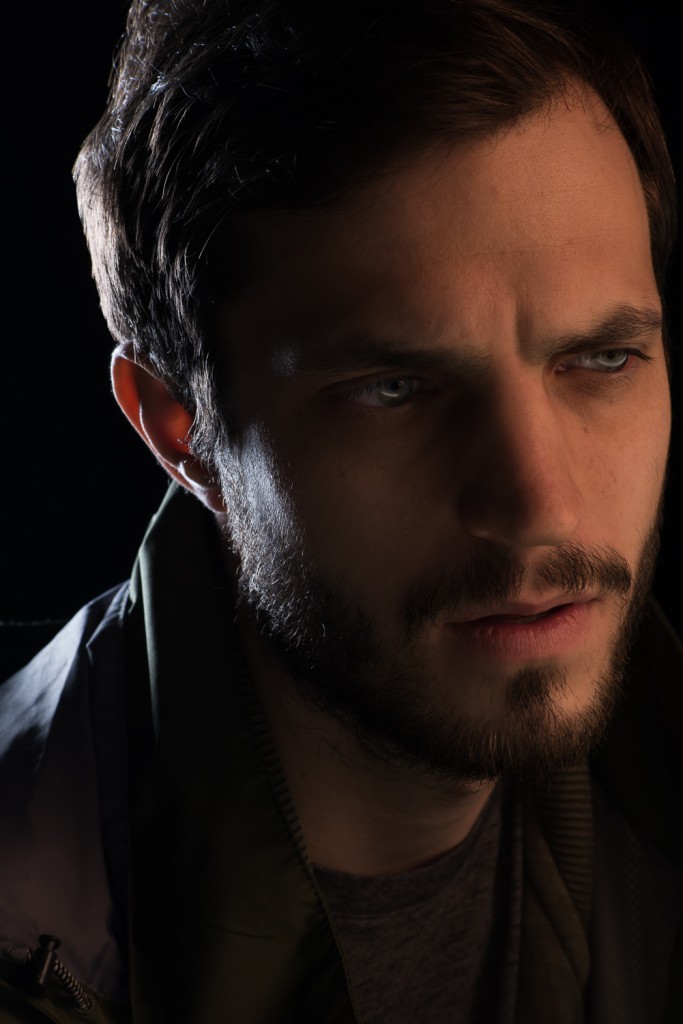 That weird laser beam cutting across each of the bands eyelids is from a florescent home depot shop light a bought … Check out my blog for a picture of it I’ve used it plenty of times for accents. Here’s a 100% view….

You can see the grid from the Apollo Orb camera Right, and the florescent tube streaking across the eye. I tried to make this unique with every members portrait by moving it around until I found a spot I enjoyed most.
As always a big thanks to Westcott for supplying me with such great gear to use on my shoots. These are all great tools to have as an image maker and I greatly appreciate their support.

This article on experimental lighting is courtesy of Pennsylvania portrait and street photographer Andrew Tomasino. You can see more of his vibrant portraiture by following @andrewtomasino on Instagram and Twitter.