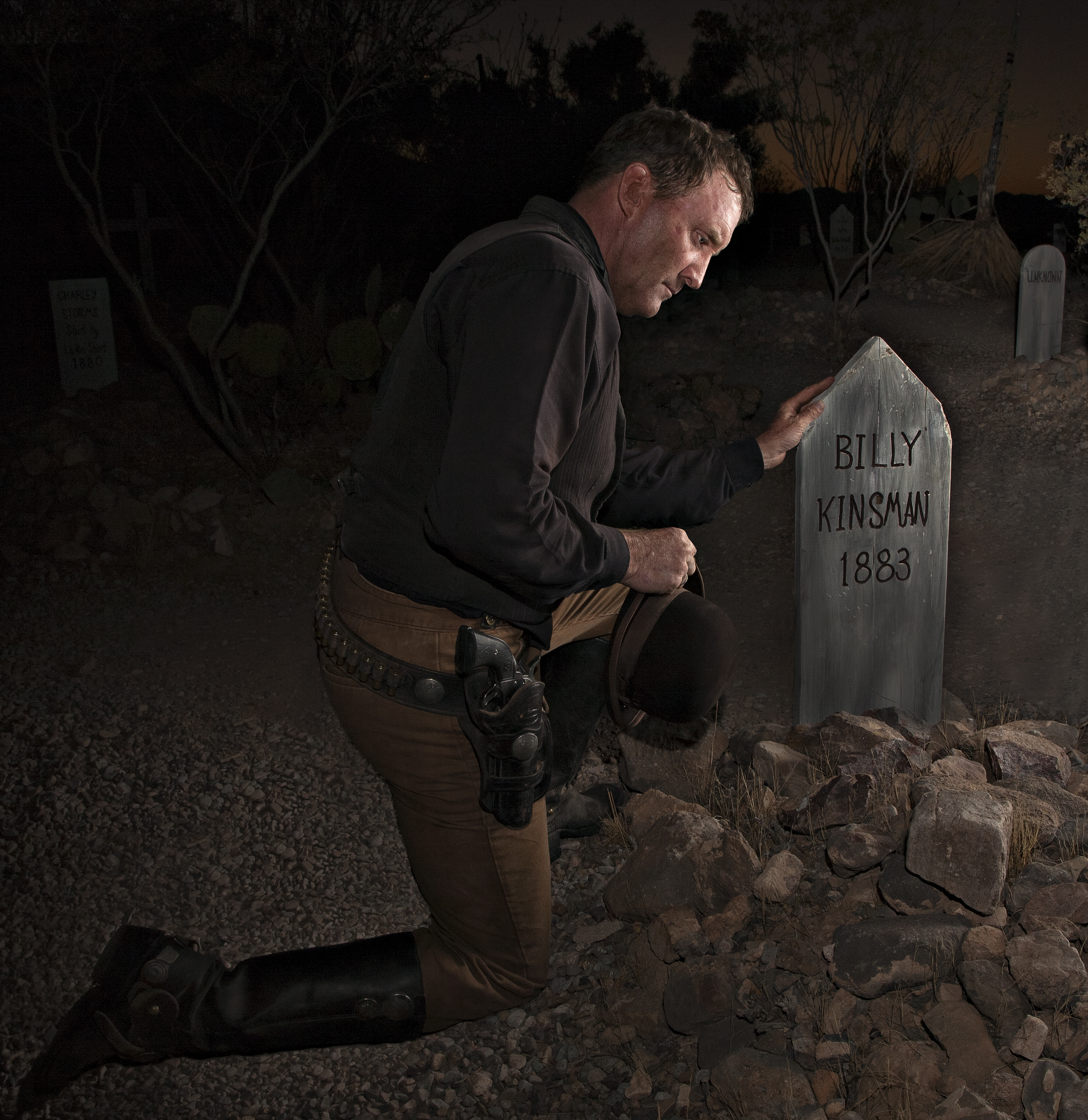 This image was taken in Tombstone at Boothill Cemetery following the Tombstone Trolley Ghost and Murder Tour with Parson George and Lee. The cemetery is one of the stops during the tour. At the time this image was taken the sun was setting and the cemetery was about to close. The trolley driver, Lee, who also posed as my model, got special permission to enter the cemetery. The store owner who told us we had only a few minutes to photograph Lee because they wanted to close for the night.

I explained to Lee how I wanted to make his image and how I would like him to pose. My wife, Elaine, helped me set up the equipment before entering the cemetery. We opened my Westcott 6 -in-1 reflector and took out the silver reflector. I installed my Canon 580 speedlite on the camera mount and set it to minus one in the manual mode. A good starting point. This speedlite allows the flash tube to be turned 90-degrees left or right or straight up.

We walked out through the general store into the cemetery. I found a grave that would work well for this capture. The grave had all the compositional elements necessary to accomplish my vision of this image, which I have titled “So Long Good Buddy.” With the foreground composition there was a grave some distance away I also wanted in sharp focus.

I set the f- stop at f:13 with an ISO of 200, and a shutter speed of 125th. Elaine held the reflector at camera right a few feet from our model. By keeping the reflector close to the him, the reflected light wouldn’t cause harsh shadows. I knew the inverse square law would come into play which states, “an object that is twice the distance from the point source of light will receive a quarter of the illumination.” What this means to a photographer is if you move your subject from 10 feet to 20 feet away from your subject you will need four times more light to get the proper exposed. I could have opened the aperture two additional f-stops and kept the reflector at 10 feet, but the background wouldn’t have been as sharp.

The next item to consider was how I want this image to look. What story did I want to tell? I felt if I “short lit” my subject, meaning more light on the side of his face away from the camera, it would bring more drama into the image, and allow more light in the background. This uses a well-known law of physics: the degree of incidence equals the degree of reflection This means if I aim the head of my speed light at the reflector using a 45-degree angle, the light would bounce off the reflector at that angle resulting in a pleasing effect.

If the light hitting the subject lit too much of the broadside of his face, I would have had to adjust the angle the light bounced off the reflector. The first image looked good but the background was a little too dark. To correct this I dragged the shutter 1/60 to lighten it up more.