I was every bit impressed with all the muscle the Flex light had to offer for a compact, flexible, and continuous light panel.

What better subject to power up against than with former World Champion Victor Ortiz. The stage was set for the challenge against “Viscious” Victor, his Championship belts and ring, as well as his alumni ring from becoming an “Expendible” from Stallone’s action thriller feature. I’ve worked with Victor on several shoots, but on this occasion, we decided to capture something more organic.

A publicity shot that didn’t scream publicity. Victor in the ring is a beast, but as a person, I’ve had the fortune to relate to him as a friend. He is very charming, engaging, attentive, and humble. Attributes that display a contrast to what is displayed or perceived in the ring. I even had the opportunity to role play the stare down with Victor. Intimidating to say the least.

As I put together some sketches and ideas on Victor’s session, the main priority in creating the mood was going to be dictated by my lighting decisions. The photographer’s vision as much physical as artistic, is what creates the mood of the final shot. The photographer and subject, when in sync, will create a narrative for the viewer to be drawn into and create their personal interpretations. This should always be the primary objective for the success of a portrait. Given the chance, most photographers might take the approach of highlighting a champion’s trophies, such as the belts or championship rings, but I wanted to take a different approach to the portrait.

For me, it is always about the subject. I wanted to have these elements supporting the portrait, with less definition. Highlighting Victor’s face, and letting everything else fall out of focus. If the portrait were to be used for advertising purposes, I might have taken a different approach.

My approach to lighting was quite simple. Timing could not have been any better as I had just received my new Flex by Westcott. For the most part, I will not shoot any piece of lighting equipment without testing, but I had to do it just this one time. I saw these lights at the Photo Plus Expo in NYC and I was impressed. The power it produces with a dimmable control dial, coupled with the pure continuous 5600K daylight it produces was the clincher. I literally was just unpacking the light as Victor was arriving for his session. Not to mention I did not have the luxury of time, as he had a tight schedule.

I tested the maximum output of the Flex by cranking it to its full 1000-watt equivalence of continuous lighting. I metered at various output settings and distances ranging from 3 feet to 6 feet from subject. I also varied my ISO from 100 to 500 to evaluate my most optimum shutter speed/aperture combination. When using continuous lighting in the past, I usually will start with a general setting of ISO 400 at f/4, and I will vary my shutter speed from 1/30th to 1/60th of a second. If depth of field is a priority, I will drop my shutter speed to 1/15th of a second at f/5.6.

Upon testing a few shots, I immediately found the Flex to be powerful enough to broaden my options. The first plus was it allowed me quite a bit of distance from light to subject. This usually is one of the biggest limitations on standard continuous lights. I was very impressed also by the spread of light the Original Flex Daylight LED Mat (1' x 1', US/CA Plug) produced. One light really was enough if finessed properly. 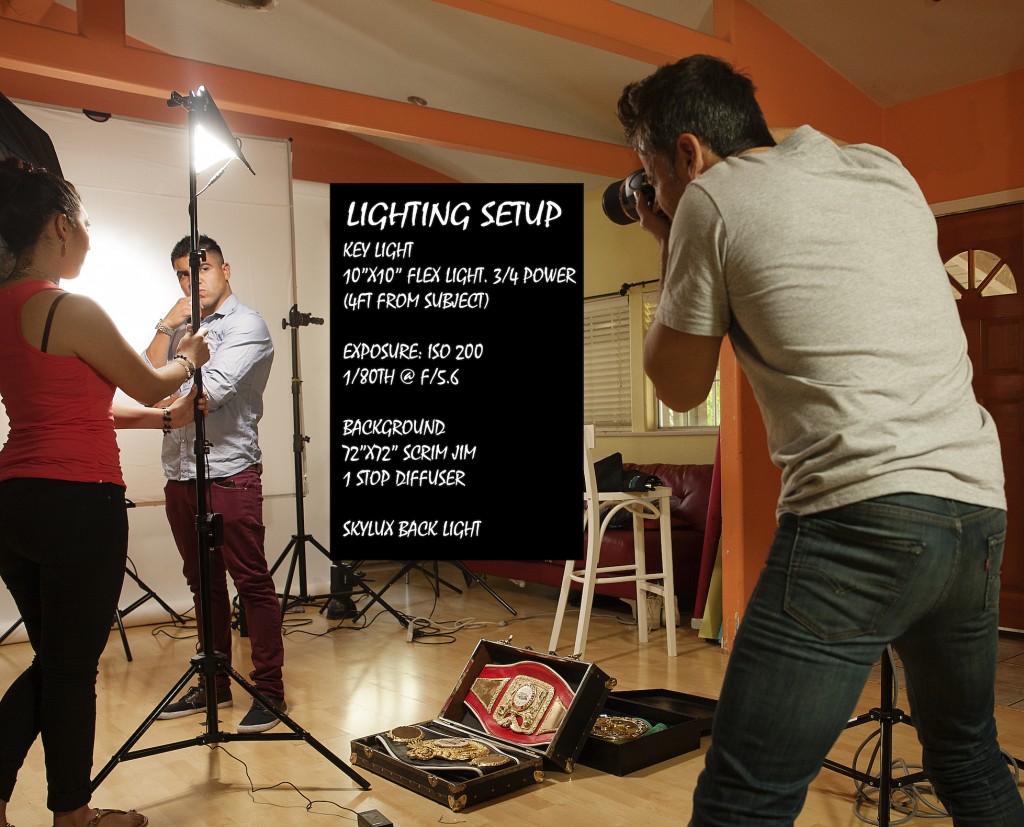 The actual physical feature of a bendable light was starting to become clear. Along with the light, you have the option of placing the light on the provided stand, or you can also clamp, roll or pinch the light to your liking. In my personal case, I meter the distance from light to subject, and I have an assistant follow my subject’s face with top lighting. It’s a common practice in commercial portraiture. This is the beauty of the Flex. Small, compact, easy to adjust, and powerful. For my character portraits, I like to create a cinematic quality of light, so this feature is a huge instrument in doing so. The Flex light will not disappoint.

I wanted to create a set of images for victory that were void of any distracting backgrounds. Sometimes I will choose backgrounds with detail that will add something extra to the portrait, but in this case, simple was more. My setups were three simple shots. The first setup was using a Original Scrim Jim Large 3/4-Stop Diffusion Fabric (71" x 71") which also gave me the option of using a 🔗Skylux directly behind his head placement for added depth. For the second setup, I simply placed a Westcott 6” x 7” collapsible Moonlight Cloudscape backdrop, which literally took a minute to setup. This also allowed me to keep the same light in place. 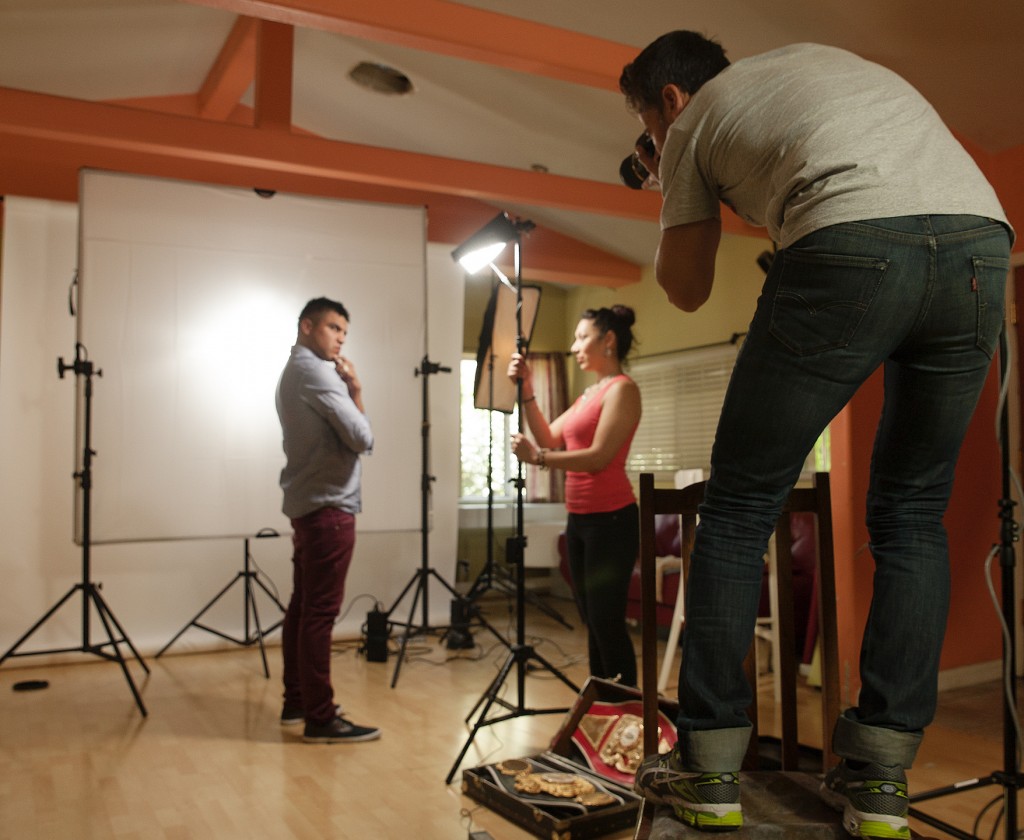 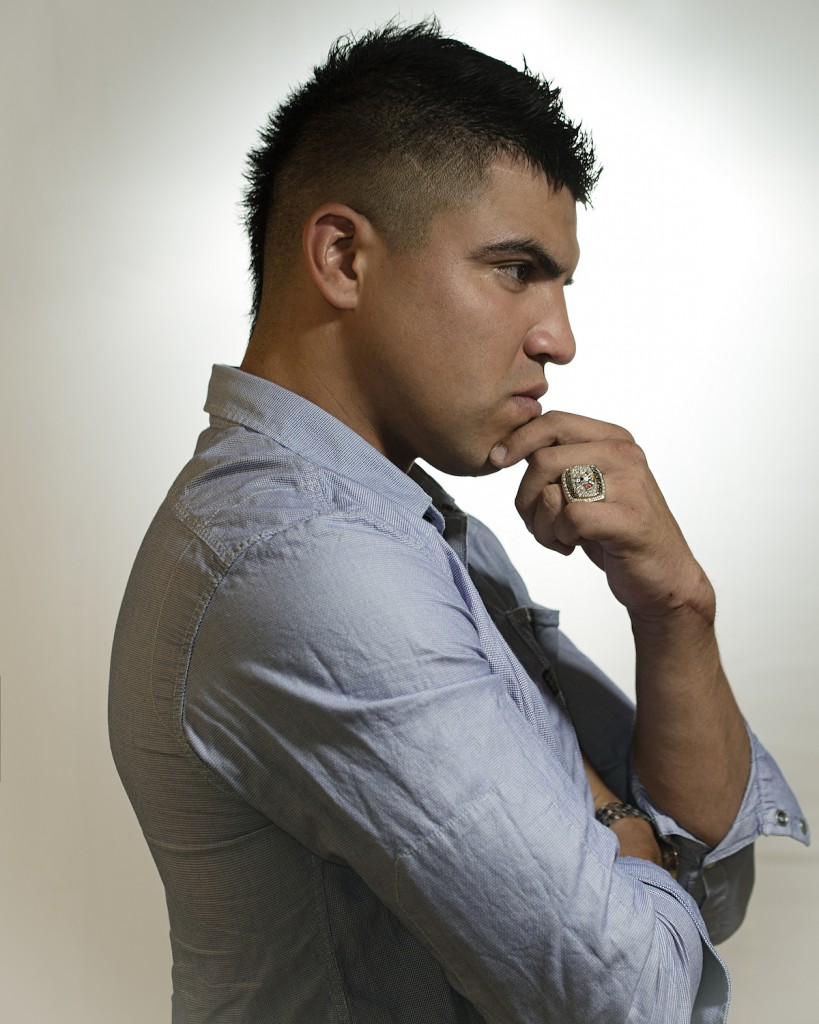 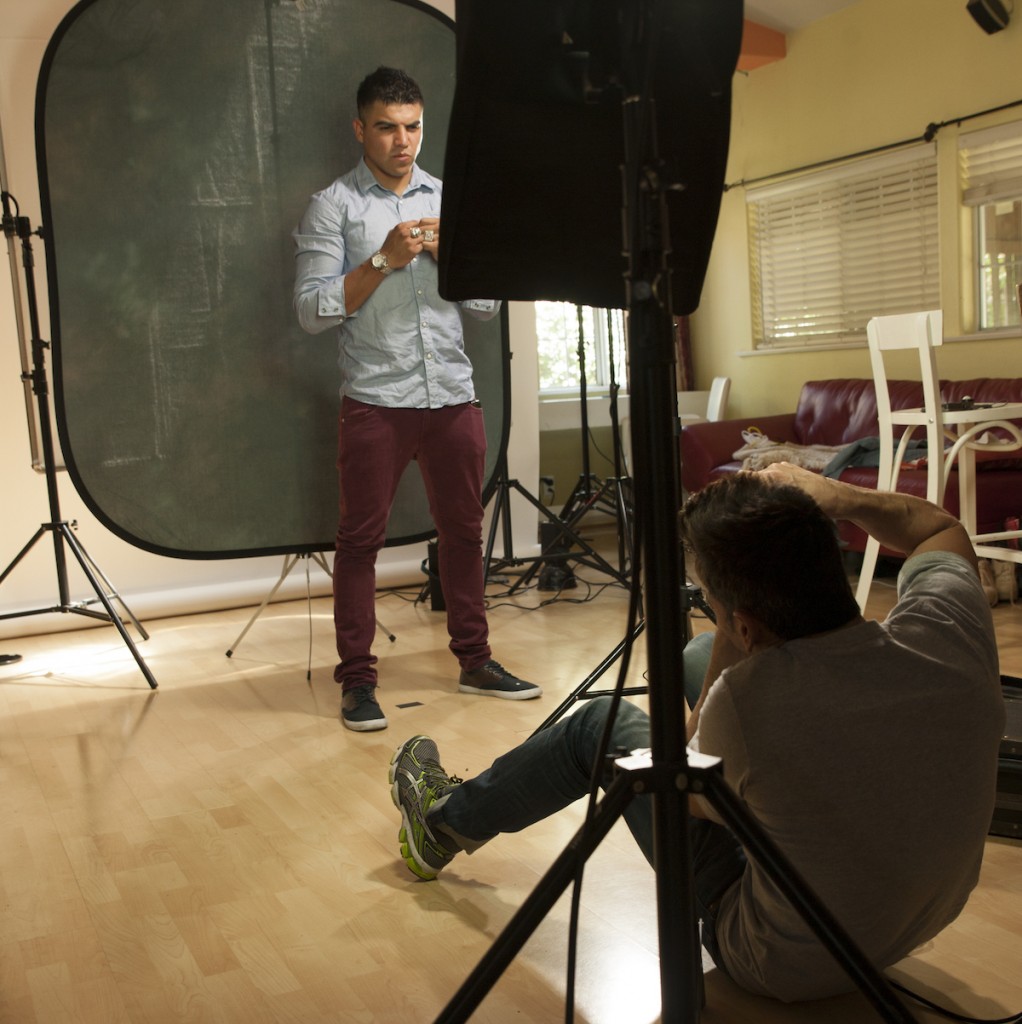 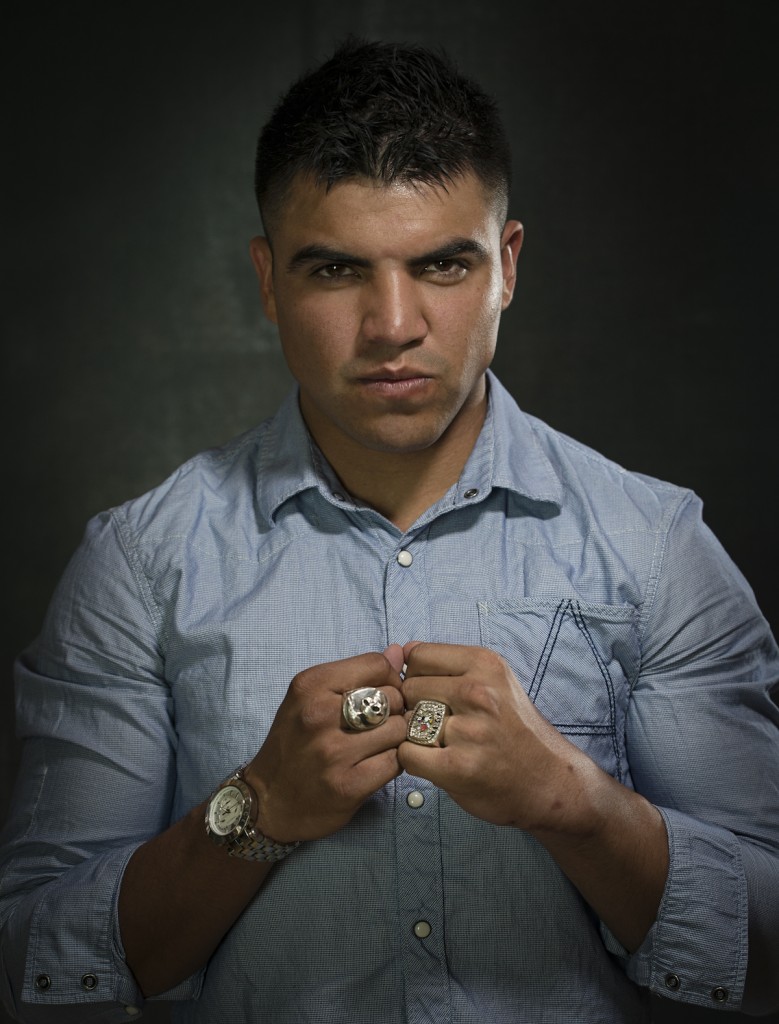 For the last setup, I simply sat Victor in a red leather studio sofa, placed his belts behind him, and adjusted the light for a seated position. The light was consistent to the first two setups. The power of the Flex allowed me in keeping my setup very simple. I usually will use lots of fill, accent and background lighting, but by strategically placing Victor closer to the backgrounds, I was able to create the separation with the light falloff. 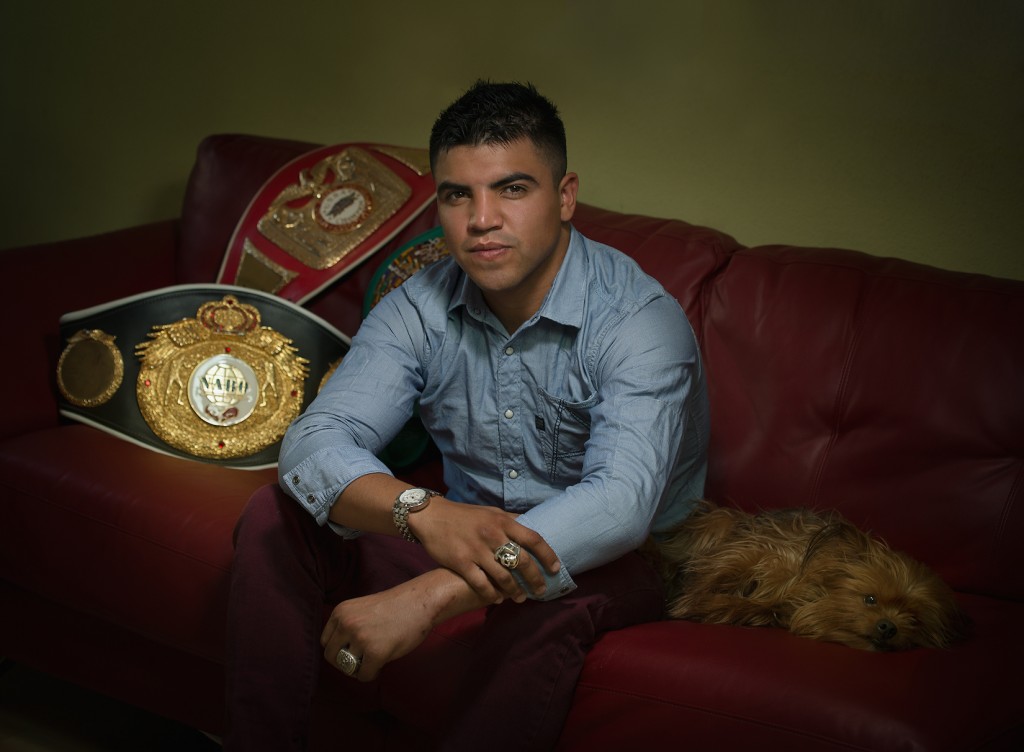 Since my subject was a male athlete, I decided not to use the optional diffuser, which produces a softer light quality. I wanted to create a little more contrast for the portrait and I also wanted to maximize the power the Flex had to offer. As I stated earlier, as a rule of thumb for most constant lights, I will begin with an ISO of 400. This allows me to go hand held at 60th of a second at an aperture between f/2.8 – f/4. Depending on the priority of the shot, I can use a tripod and drag the shutter to 1/15 of a second, or I might even increase my ISO to 500, and bump my shutter speed to 100th of a second. With the Flex, I had a lot more options to work with due to the maximum power.

My distance from the light to subject for the first two shots was around 4 feet, set at ¾ power. With other constant lights, I will normally place the light right out of my camera frame.

For my last portrait, which was shot on a broader set, I increased the output on the Flex light to its maximum setting. This was done to allow enough light for Victor, the belts, the sofa and even the little puppy, who jumped on set for a quick shot. I also increased the distance from light to subject to a little over 5 feet. This kept the exposure similar to the first setup. The light I also feathered at an angle to come across the inside shoulder of Victor which created a beautiful light falloff. No hot spot on my subject with even gradation of light. My final exposure was set to ISO 200, shutter speed at 1/100th of a second, with an aperture of f/5.6.

Simply put, I was impressed. Not only did it have a lot of power packed in a thin small flexible pad, but I was also able to power up or down my desired output with a dimmable dial. This was the most important feature of the Flex light. The latitude it provided me in increasing the distance of light to subject and the ability to mold the light to the specific need of my subject. I can see creating incredible beauty lighting with the Flex light for a future feature. In this occasion though a powerful light for a powerful subject. Both subject and Flex very subtle in appearance, but they both pack an incredible punch when put to the test!!

This article is courtesy of Westcott Top Pro and celebrity portrait photographer Hernan Rodriguez. You can find more of his eye-catching portraiture on his website.