When working in the studio in most situations, 1/280th of a second flash duration is more than enough to freeze your subject. But sometimes you need to photograph something that is moving much faster; a spinning dancer, a burst of powder, or in this case, splashing water. In these situations, you really need to think about your flash duration speed for freezing motion – whatever action you’re trying to capture.

For this setup, I wanted to keep the light on the model’s face soft, while still creating dramatic shadows. I used an FJ400 strobe modified by a 🔗Rapid Box Switch Octa-M as my key light, with only the outer diffusion attached.
I then added another FJ400 modified by a hard reflector as a rim light opposite the key light. This allowed me to catch the glow of the light through the water when it was thrown while also separating my subject from the backdrop. I also added a blue gel to the rim light to add some color and mood to the photo.

I knew that I really wanted to freeze the water droplets, so my flash duration would have to be faster than what I would normally use when shooting with strobes. So I set both FJ400s in Freeze Mode, where the flash duration speed can be set at up to 1/7000th of a second t0.1 or 1/19000 of a second when measured in t0.5.

What is Flash Duration?

Flash Duration is the amount of time the flash is emitting light. There are several ways to shorten your flash duration when shooting fast-moving subjects. The most common option is to lower the strobe’s output. The less power the strobe needs to fire, the less time it will be emitting light. However, while this does shorten the flash duration, it may still not be fast enough in many situations.

An alternative way to a shorter flash duration is to achieve a powerful yet quick burst of light. I was able to do this by utilizing the FJ400’s Freeze Mode. Typically, when a flash fires, it will peak very quickly and then trail off slowly. Freeze Mode works by cutting the flash just after it has reached peak output. This makes the flash duration much shorter. Graphed out, this appears as a sharp cut in output.

Just like when shooting in normal mode, when shooting in freeze mode you can also get even faster flash duration by lowering your flash power. While this is great for freezing action there are also some things you have to give up, mainly power. Since I wanted to get each individual water droplet frozen in this shot, I used freeze mode and also dropped the power of the strobe so that I could shoot at least 1/18000 (t.05) of a second flash duration.

Since I was using less power on the strobe, I had to adjust my camera to get a proper exposure. My settings ended up being 1/200 of a second, F11, ISO 1250. I wanted to keep my shutter speed at my sync speed and keep my aperture small to make sure all the water drops are in focus I compromised with my ISO knowing that even though there would be more noise my camera could handle it well.

Another thing you have to compromise on when using Freeze Mode is color accuracy. Colors will tend to shift more blue, but this can be easily fixed in post-processing. When trying to freeze action with fast flash duration it is important to make sure there is as little ambient light as possible, since this can show up as motion blur, especially with shorter flash durations.

Comparing the two images below, you see the difference in the two different modes, especially in the details in the water droplets. 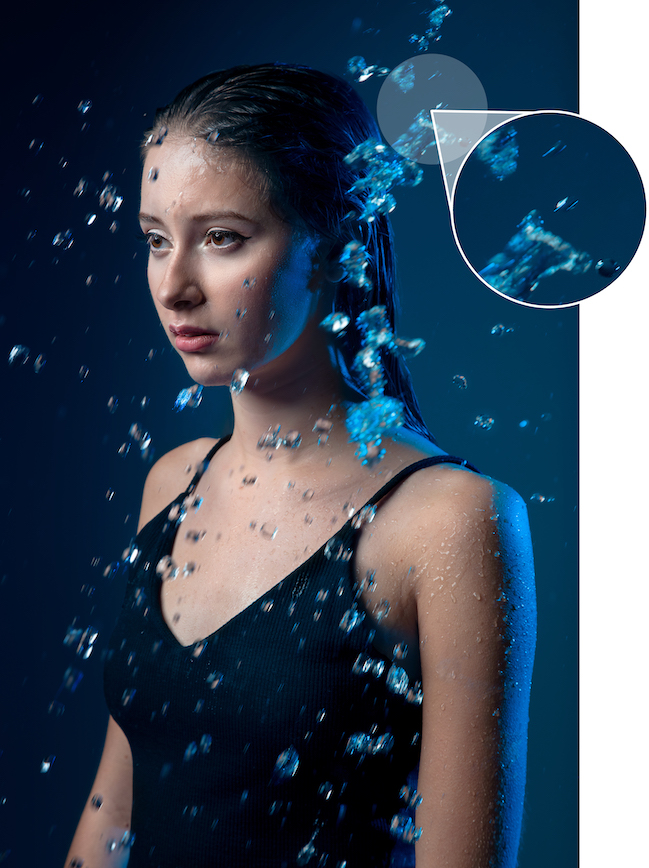 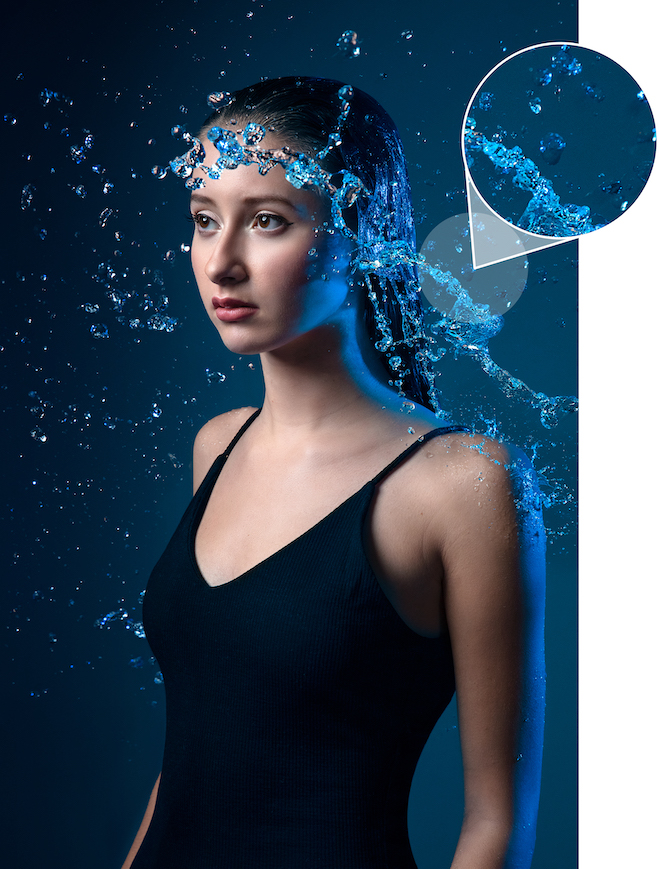