For years of going to Monument Valley and visiting my friends, the Yazzie’s. This was my first time using the Ice Lights in the Hogan. A Hogan has a dirt floor and a hole in the center to vent out the smoke from the wood stove using a stove pipe. The hole on top is about three feet square. The inside of a Hogan is usually built using juniper. This particular Hogan was constructed in the 1980’s. It’s also a female Hogan since it has 9 pillars holding up the juniper, each pillar represents one month of pregnancy . The door in a Hogan always faces East so they can wake-up to the rising sun.

The typical lighting I use when taking people to the Hogan for a workshop is, setting up a one or two stop diffuser from my six & one Westcott reflector kit, putting it on a Westcott stand and raising it to capture the light beam passing through the center hole, it turns the whole Hogan into a giant softbox! This always seems to work very well during the day light hours. However this isn’t the case after 4:30 PM  in November on the Navajo Reservation in Monument Valley.

The Ice Light was a big surprise for me. I did some research on the use of the Ice Light after receiving it.  After using the recommended charge time of 2.5 hours, I took the Ice Light  into my studio to try it out in the dark. It was amazing to see how much light this little unit put out! My mind began to spin with all kinds of creative ideas for its use in Monument Valley. One of my thoughts was to use the light to paint the outside of Hogan, but it rained that night so I stuck to the original plan of lighting Effie Yazzie as she sat at the weaving area. To enhance the look of the inside of the Hogan I used a 1/2 stop CTO to warm the light up. The CTO clips came in the box with the Ice Light from Westcott. The normal color temperature on the Ice Light is 5600 Kelvin, by taking it down a 1/2 stop It warmed it to about 4300 Kelvin. I found I could control the direction of the light along with the quality of the light very easily by hand holding it. If I was in the Hogan alone I could have put the Ice Light on a light stand using some accessories from Westcott I could have easily used the light to sculpt any light pattern from broad light, short light, Rembrandt lighting, loop lighting and butterfly light with no problems at all. It made it easy for me to explain lighting patterns to the 27 people that were in the Hogan during this demonstration. I had one of the participants push the button on my camera and another participant us his LED flashlight with a 1/2 top CTO to paint me during this capture. 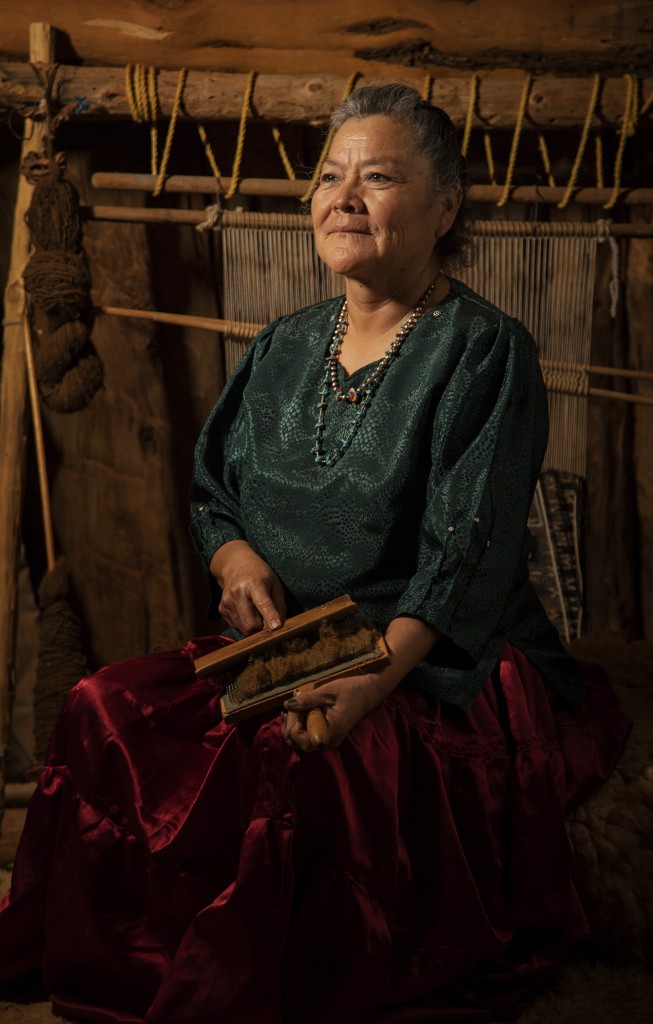 In conclusion, I was very impressed with the Ice Light, I know the use of an Ice Light in a Hogan is a rare event, but the creative possibilities are endless, and the participants have captured images that wouldn’t have been possible before.