Stylized portrait shoots open the door for photographers to really use their creativity. In this tutorial with Top Pro and Westcott’s in-house photographer, Ashley Boring, we’ll watch her breakdown a playful disco themed portrait photoshoot.

The goal of this photoshoot is to capture two completely different looks for her model’s portfolio using a disco ball as a prop. The first setup is a vintage 80’s glam inspired look captured with the intention of creating a hard direct light to mimic a stage or spot light.

She begins by placing the FJ400 to the left of her model with the 45-degree deep focus reflector. Adding this light modifier to the flash shaped the light into a tight beam and created deep shadows and hard transitions between the shadows and highlights. Ashley then adds two FJ200 strobes to create hairlights to both sides of her model which helps separate the subject from the black background. She incorporates reflectors with grids on each FJ200 flash to keep the light focused and minimize light flare hitting the lens.

After taking a few test shots, Ashley quickly notices that because of the space she is in, the front of the disco ball is reflecting black and doesn’t look like it’s lighting up. To fix this, Ashley flips the whole set up so that the disco ball is facing the white wall behind the subject. This way, instead of the ball reflecting the black color of the surrounding walls, it reflects white, and therefore stands out more in the final image. To further brighten the background, Ashley points two FJ400 strobes at the wall to reflect more light onto the ball.

Finally, to add a touch of flare to her photos, she adds a star filter to her camera lens. This made it so any light shining back into the camera would be shaped into a star, which is evident in the reflections of the disco ball and on the rhinestones on our model’s dress. Taking it a step further for her stylized shoot, Ashley adds a diffraction grating sheet to the front of her lens which creates rainbow highlights in her final photos. A diffraction grating sheet is used for directly viewing the effect of the creation of color and light sources. 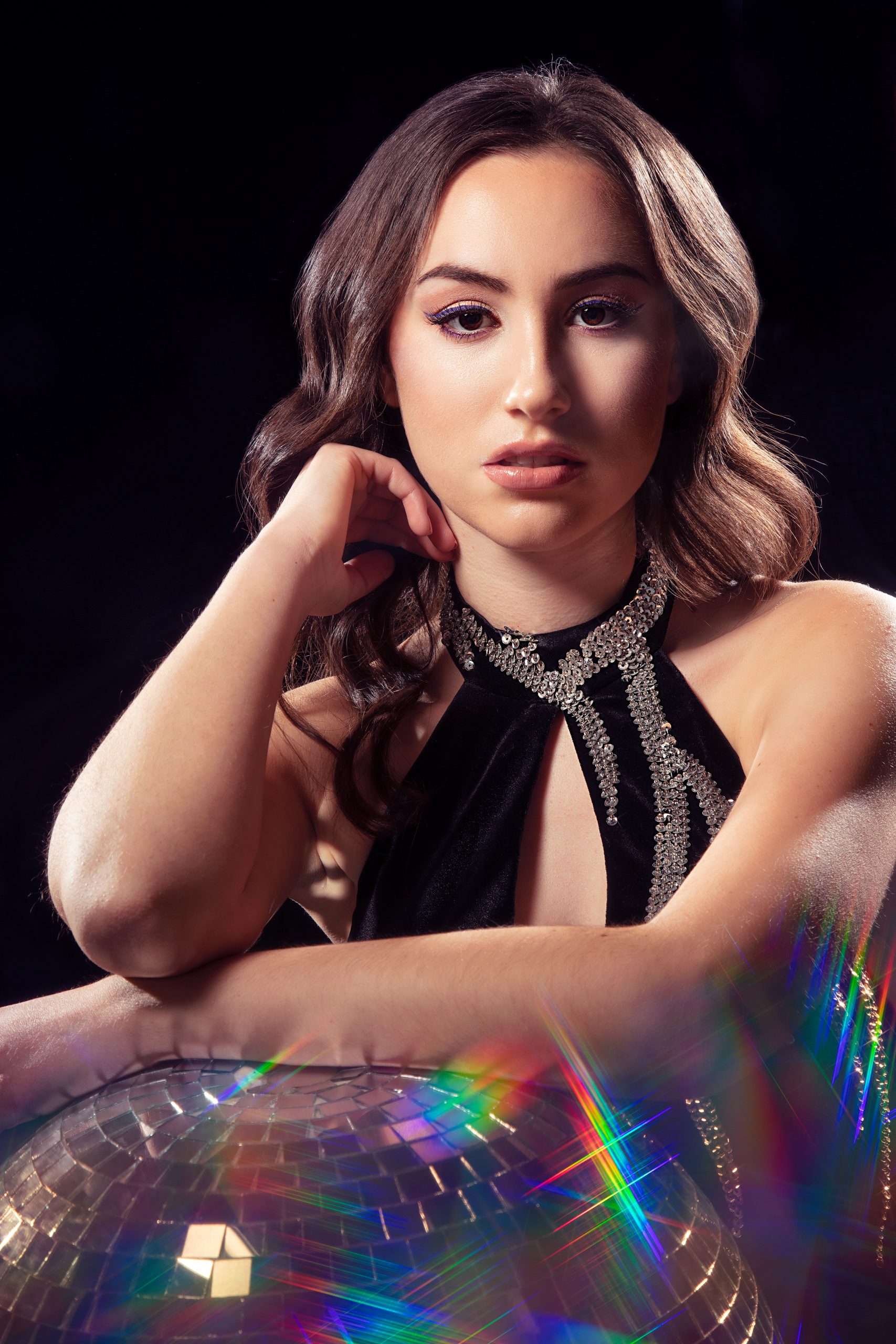 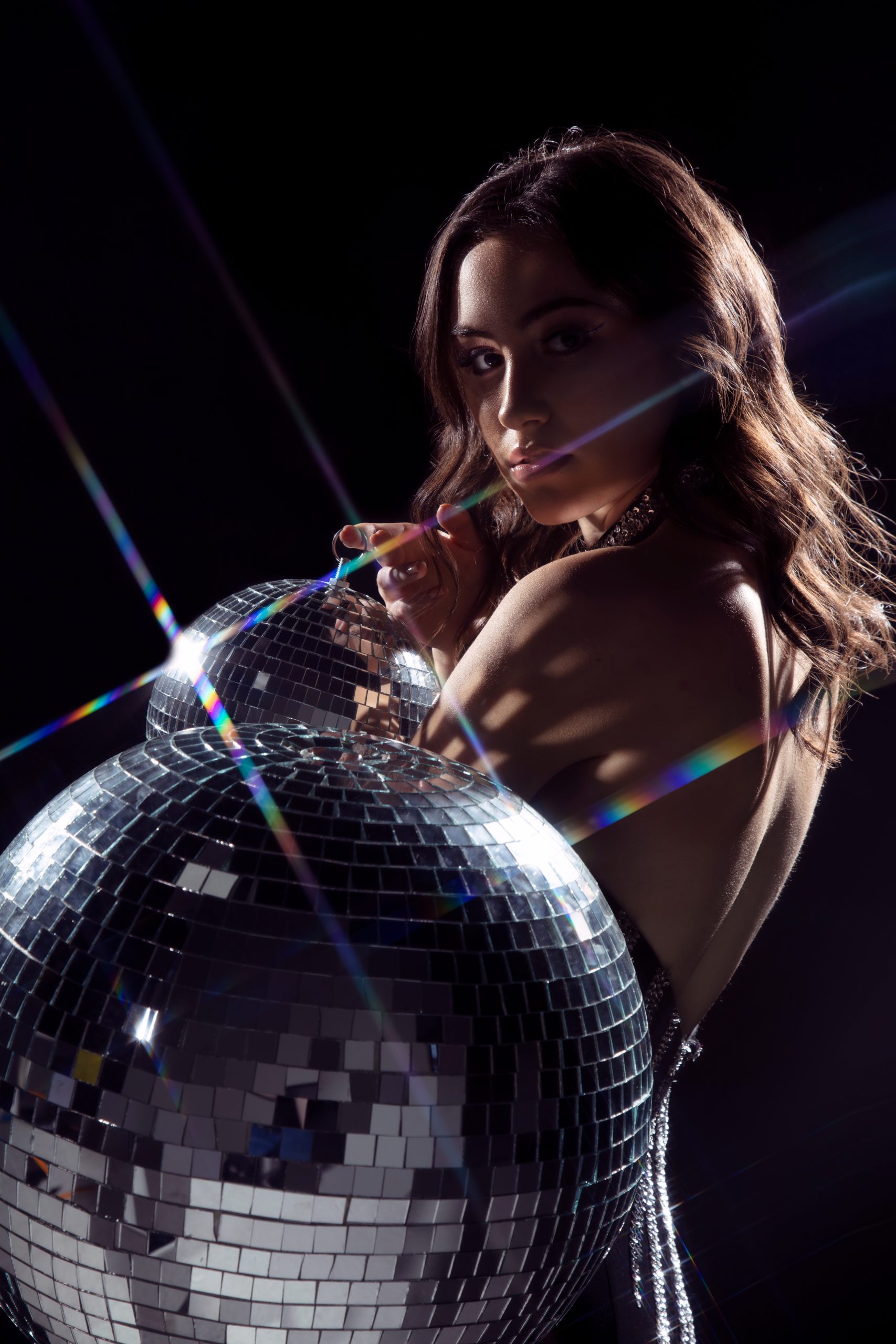 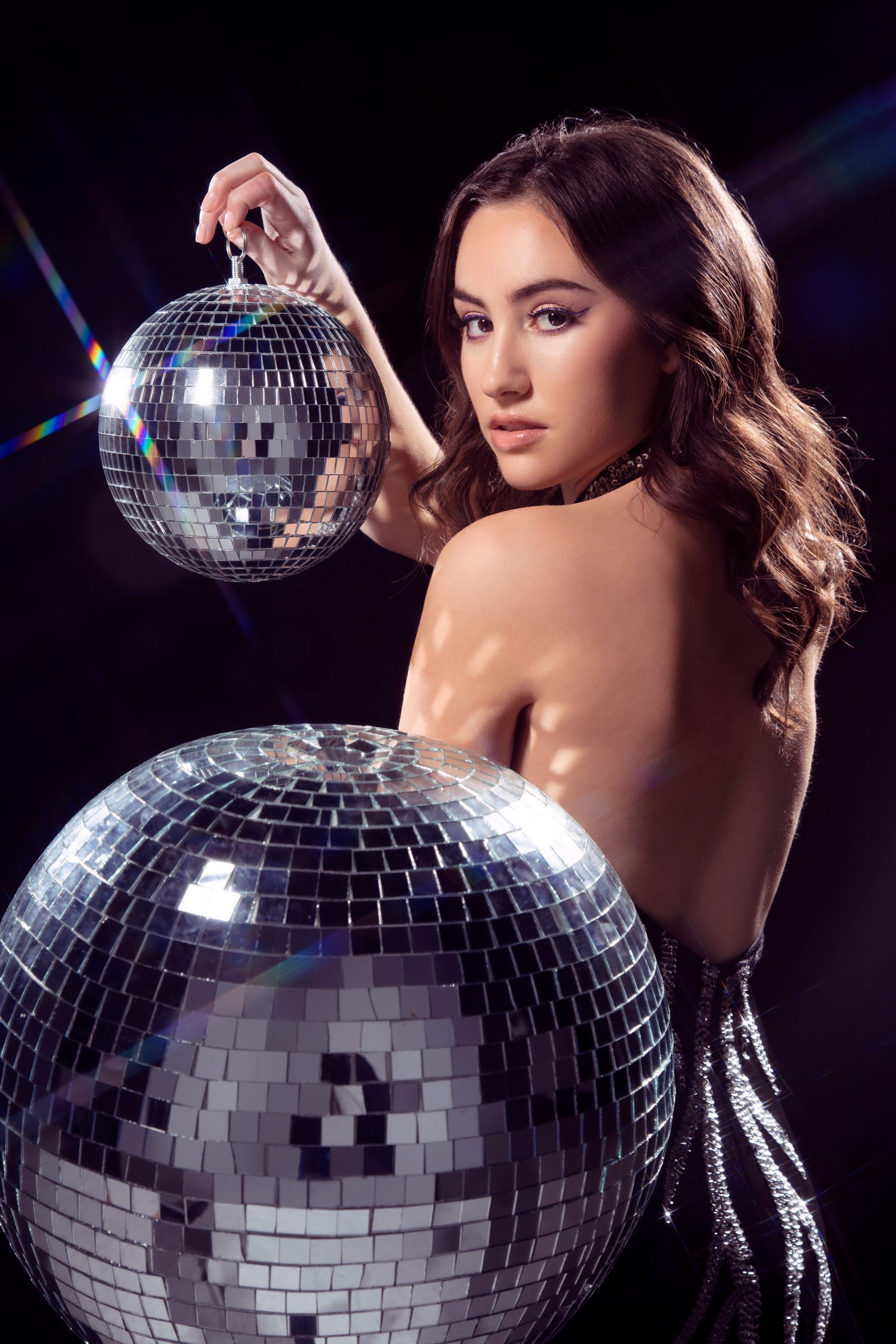 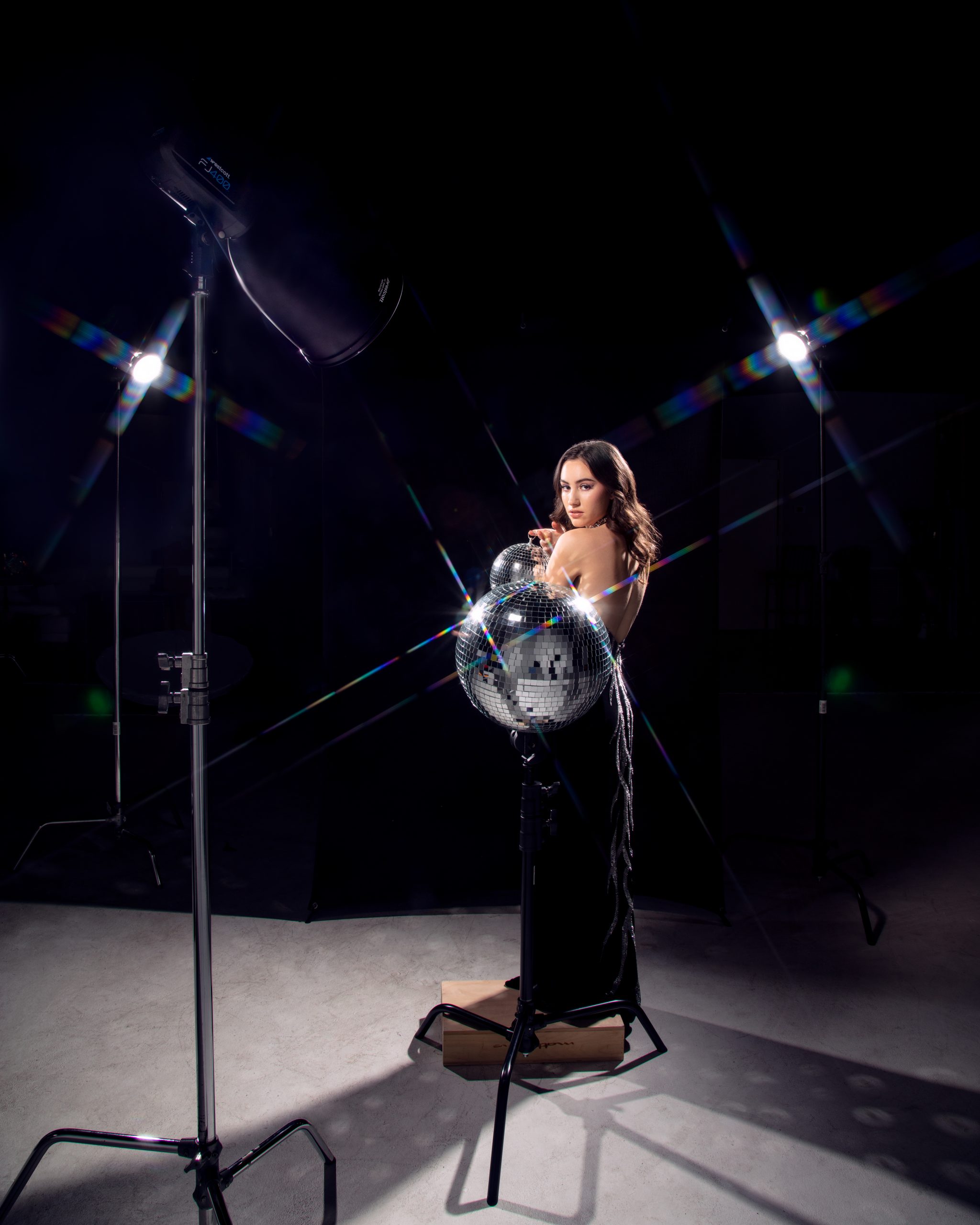 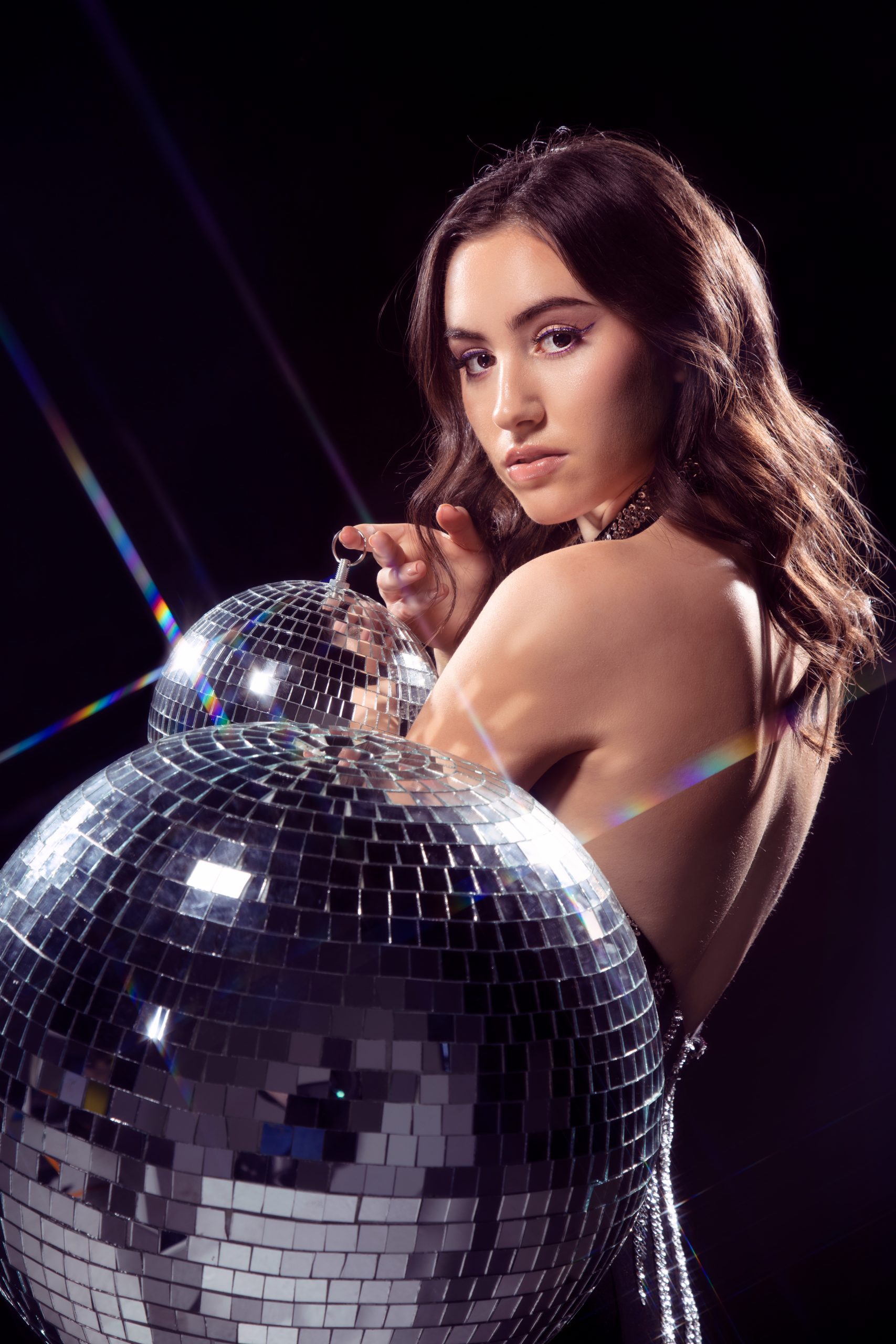 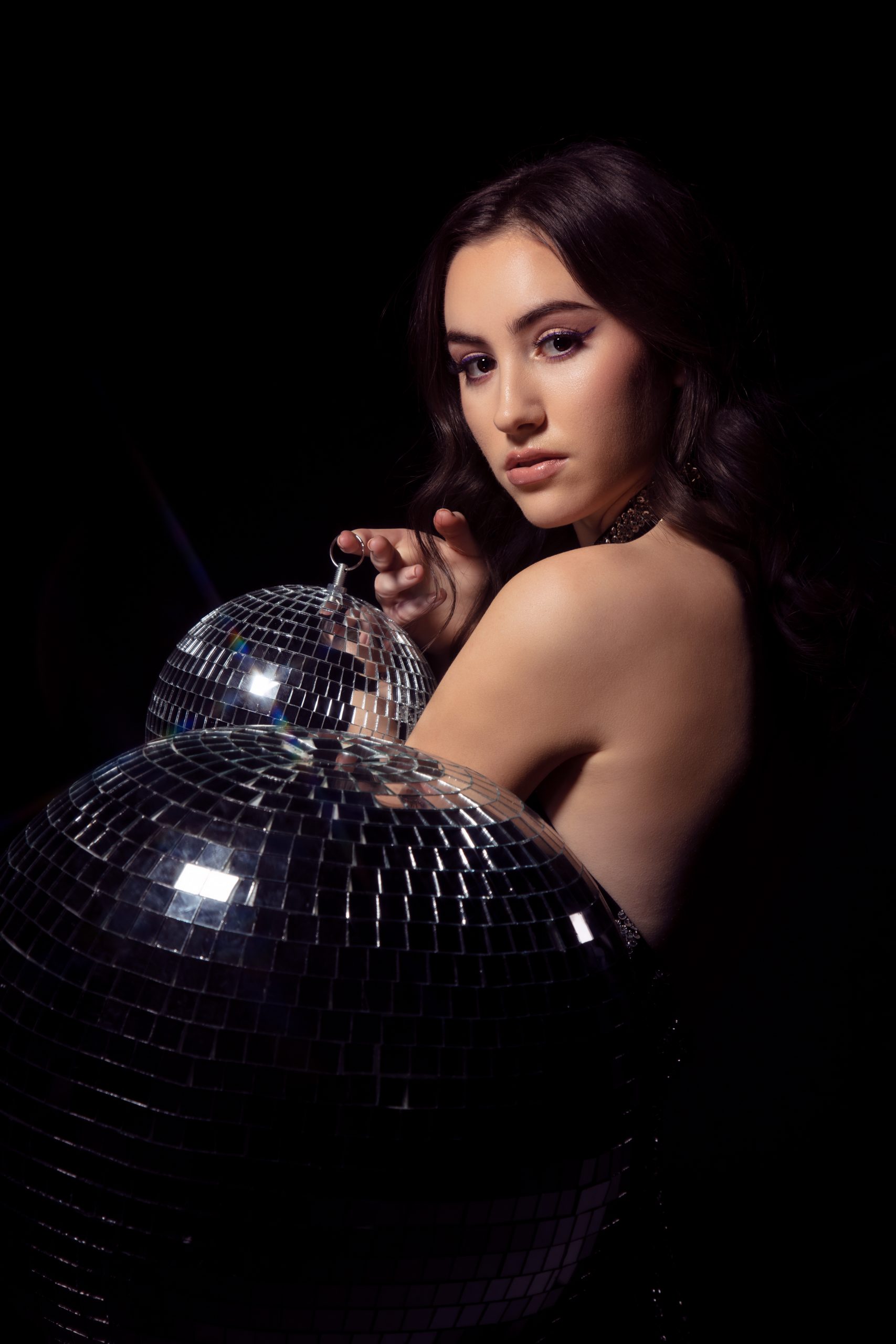 For the next look, Ashley is aiming for a modern shot with a punch of color. Amping up her creativity, Ashley creates a triangle of mirrors to play with the light. The reflection of the flash in the mirrors produces a unique prism effect on the wall behind the model.

To achieve this prism structure, she uses gaffers tape to connect the three mirrors together and creates a triangle shape. She then places an FJ80 inside the triangular structure which provides her with more control of her light than a larger flash would. Working with the FJ80 speedlight in this small of a space also gives her the benefits of casting a smaller beam angle. This in turn, captures much crisper lines in the shapes reflecting off the background. Additionally, the FJ80’s round head design has the capabilities of zooming which allow her to quickly change the size of the effect on the background.

She then aims the center of the prism at the model so that the brightest part of the pattern will light up her subject and draw attention to her. Bringing the FJ400 with the deep focus reflector back into the setup, she is able to add some extra light to her model’s face. She places the strobe far enough to the side so that the shadow cast by this light would fall out of frame. It is important for her to place the second light far enough off to the side so only one shadow is casted. PRO TIP: When placing a light far off to the side she always lets her model know they need to favor that side when posing, that way the light is always flattering her model.

For her final lighting setup, Ashley places another FJ400 and adds a blue gel to the front of the flash to add color to the scene. This helps fill in shadows with a blue light and gives her final image that pop of color she is aiming for. Ashley uses the star filter a second time to give some sparkle to the dress and disco ball. 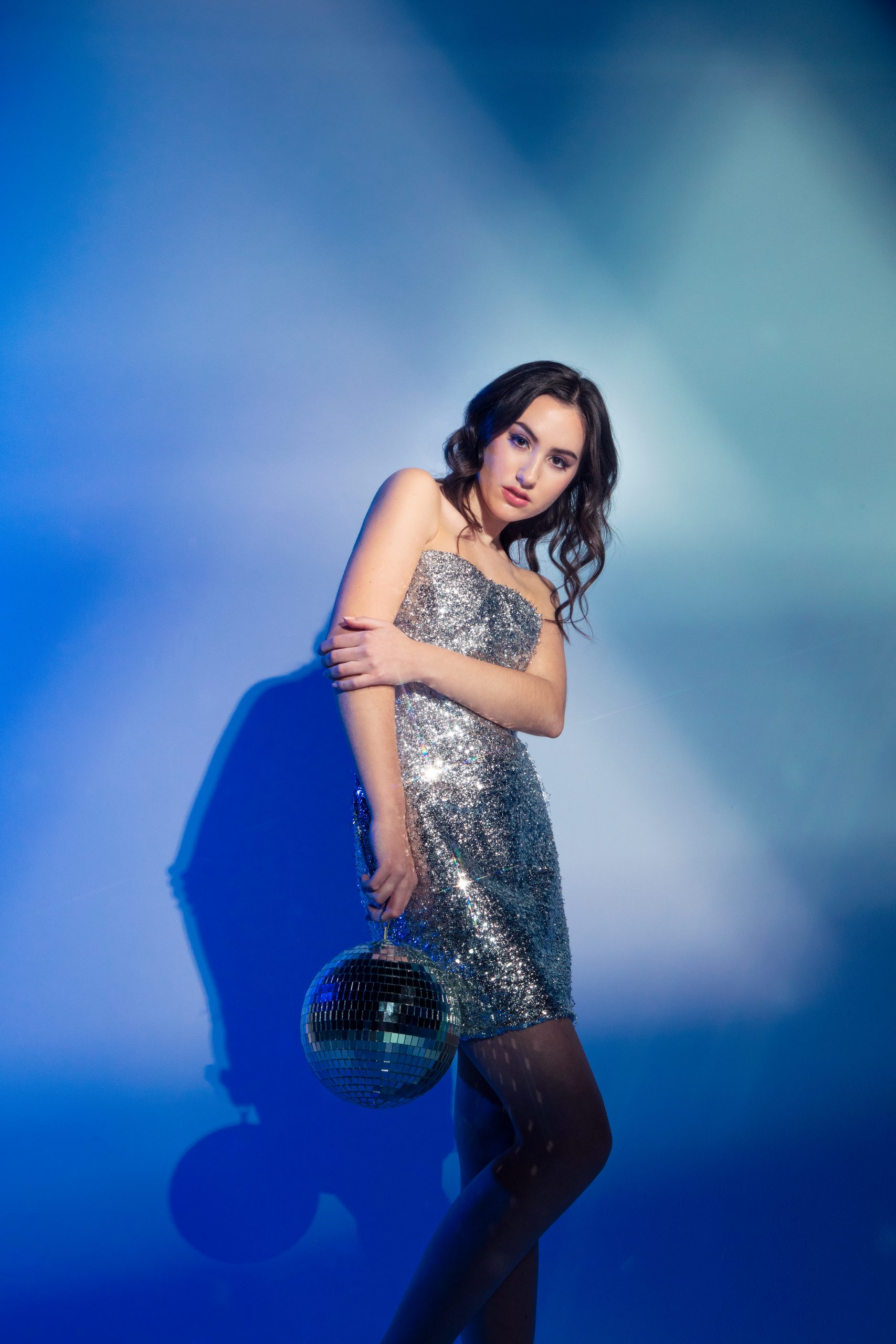 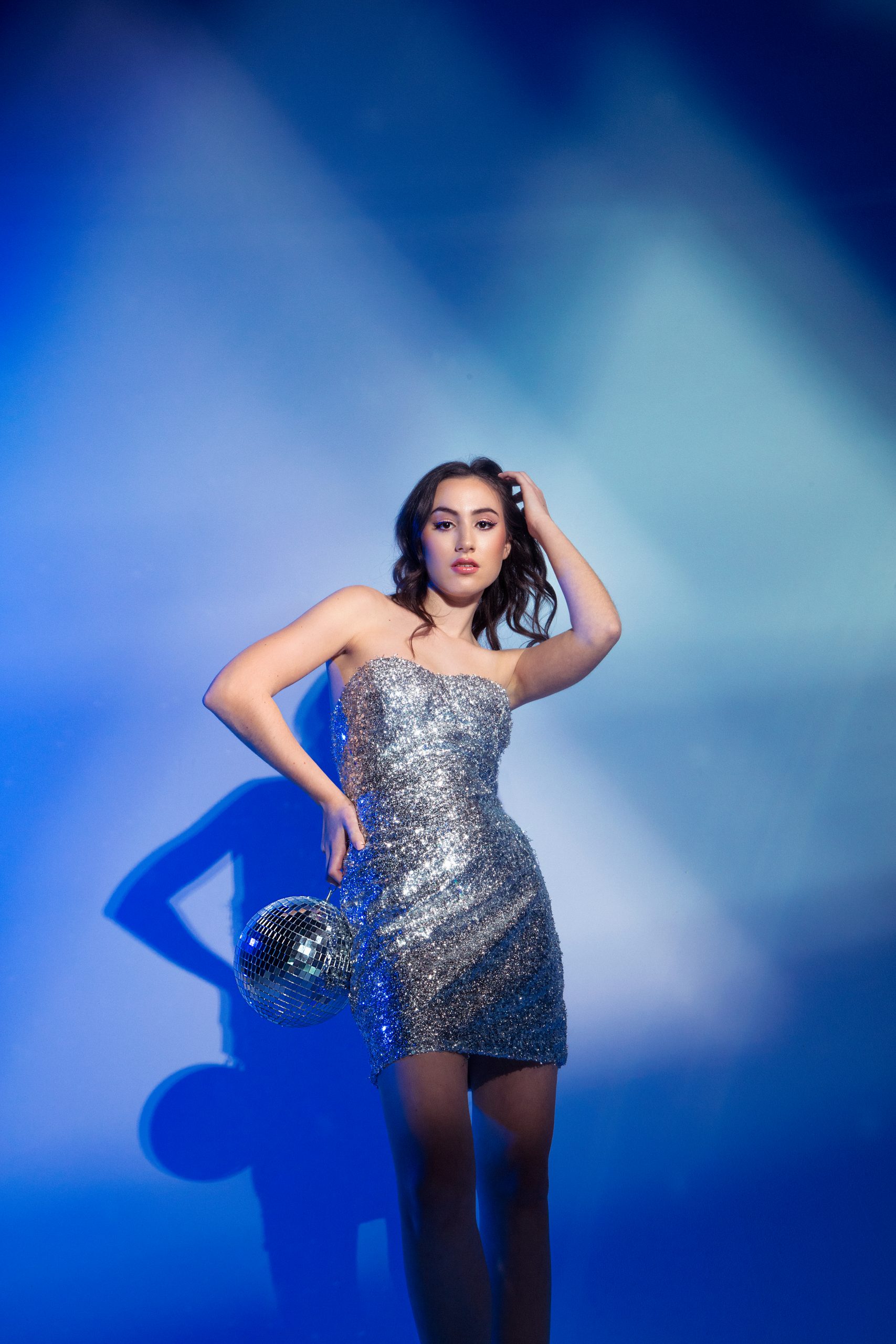 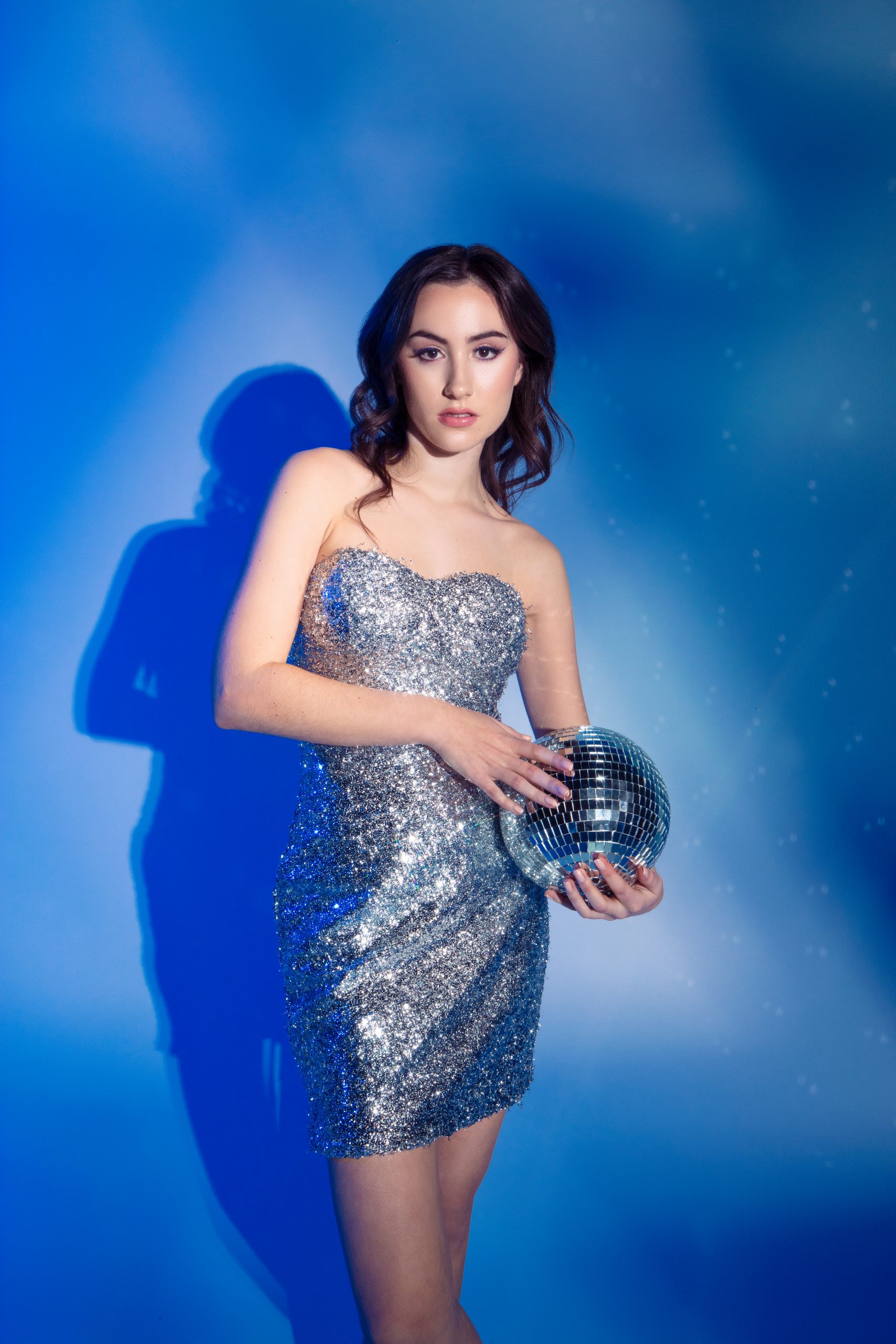 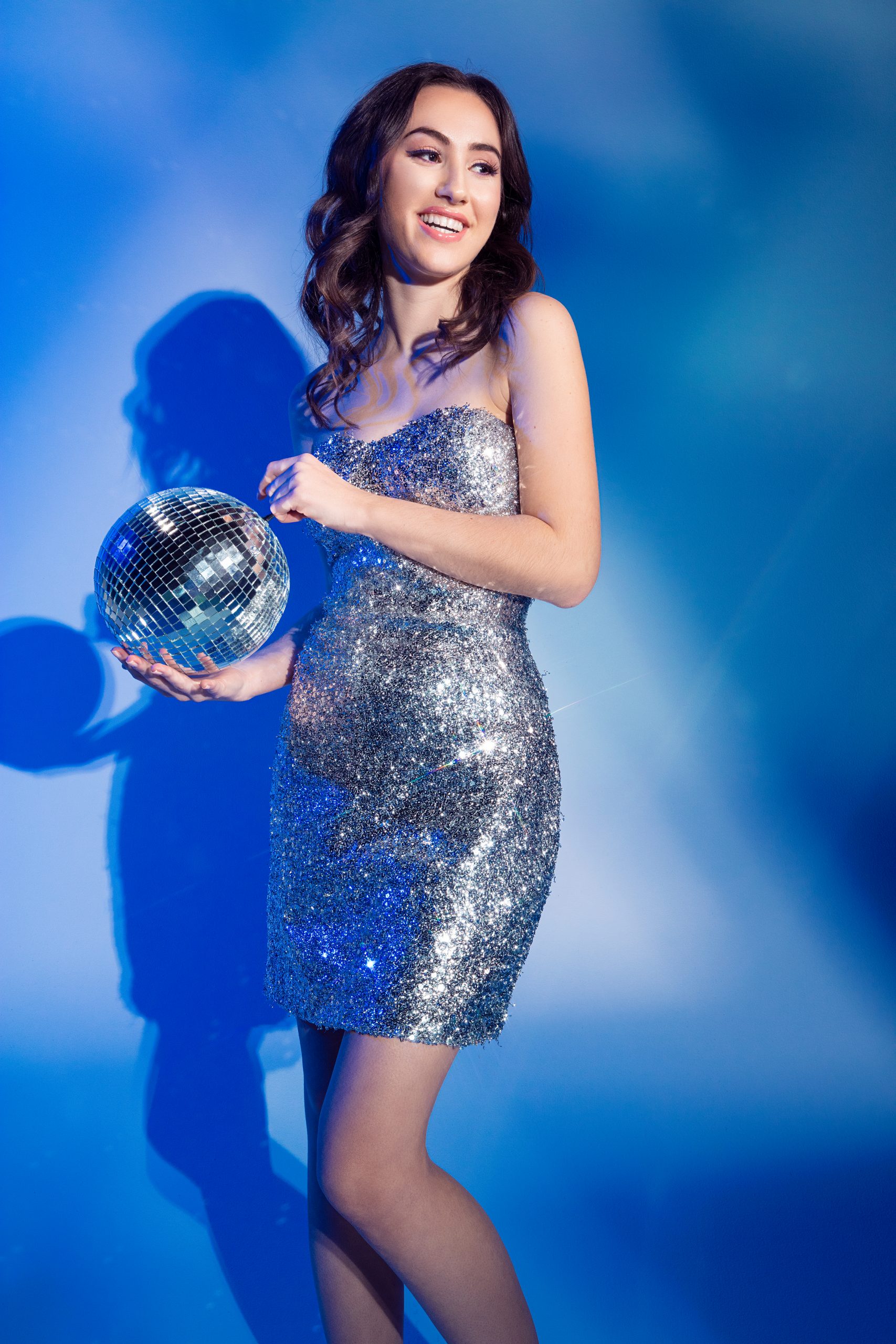 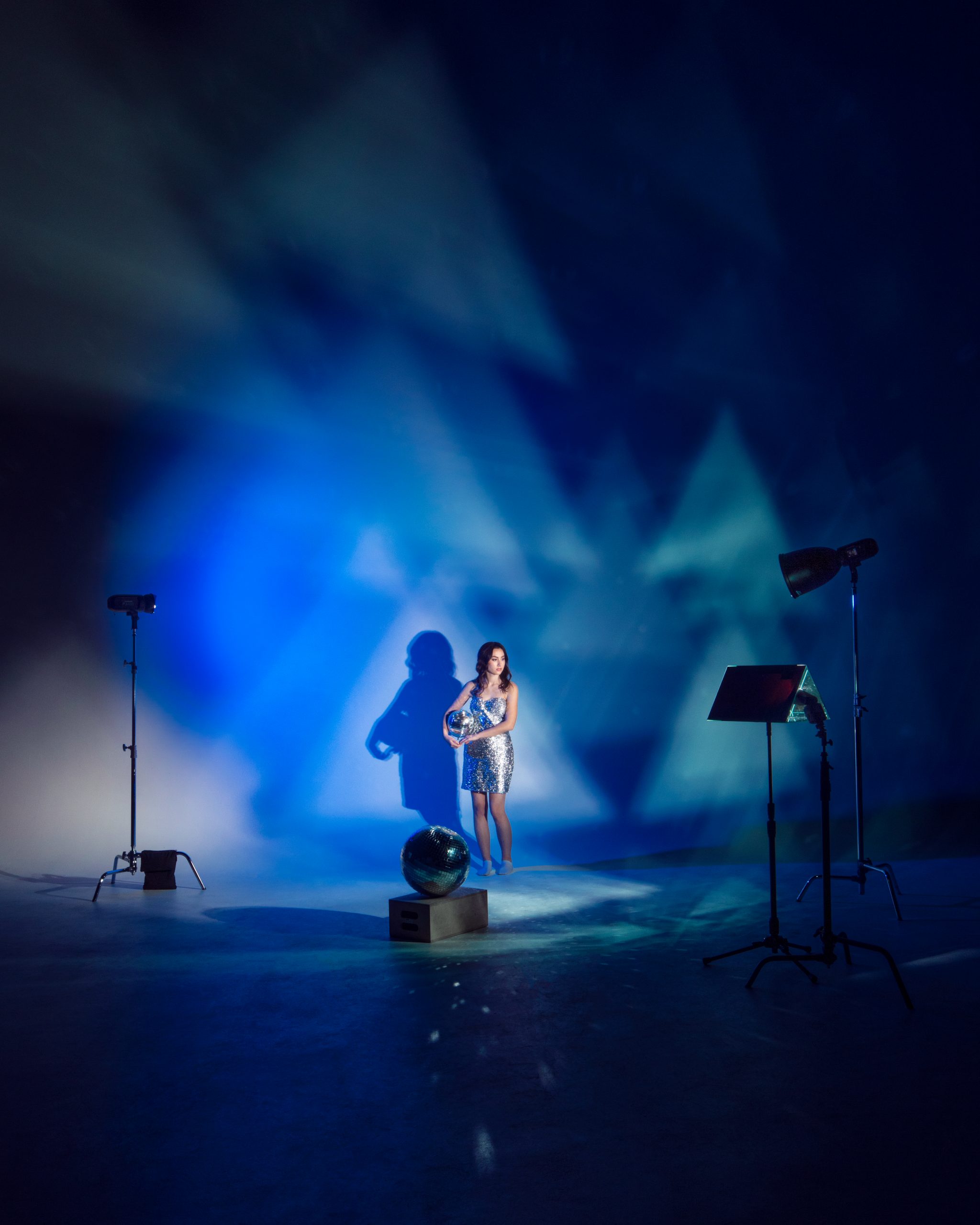 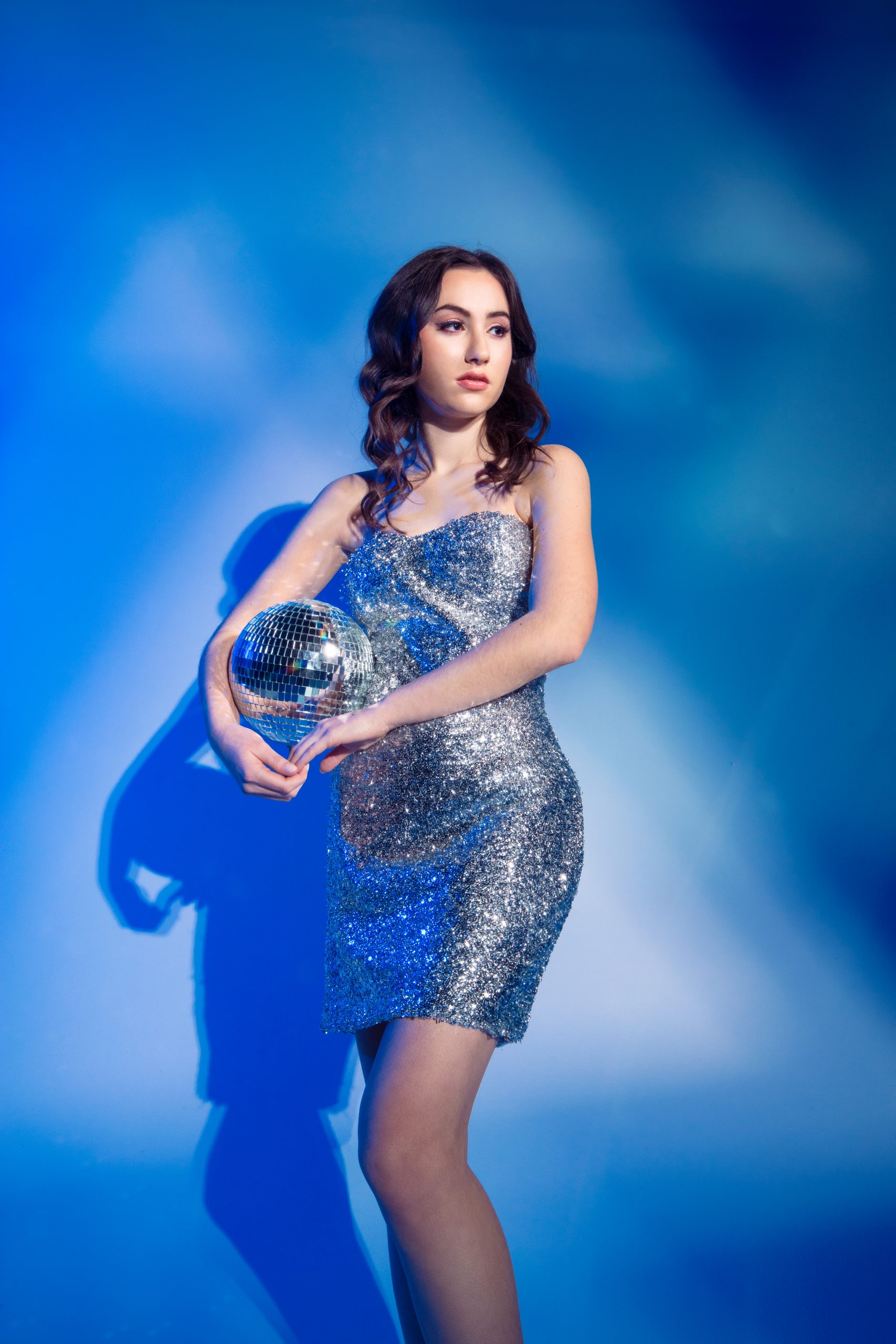 One of the key points to successfully capturing this shoot is the variety of ways the FJ Wireless Flash System can be used cohesively. Having the option to choose the flash and power level, while also maintaining a consistent color temperature of 5500K between different powered flash units helps photographers produce the best outcome. Since all of the FJ Wireless flashes are designed to work together seamlessly with the FJ-X2m trigger, you can quickly control and change the power level of each light from the trigger on your camera. This allows Ashley to quickly set up between the two looks and capture unique images.