In this video, Ashley Boring walks you through a creative on-location photoshoot bringing her studio setup outdoors. Inspired by floral themed shoots, Ashley captures unique portraits in a natural park.

The first step to every shoot is pre-planning. Ashley’s vision is to bring her studio outside for a hybrid photo on location. She chooses the 8’ x 8’ Parchment Paper Printed Fabric backdrop. Ashley intends to capture neutral earth tones of the background with the greenery or the park.

With a general concept in mind, the next step is finding a location. Ashley prefers to scout locations a day before the shoot to ensure nothing is under construction, see which flowers are in bloom, and avoid other potential issues.

When scouting for this shoot’s location, Ashley looks for an area of white flowers that don’t have too many other colors mixed in. Finding a spot that isn’t far from parking is also important since she will be carrying a lot of gear with her. Pre-planning is essential to the success of a shoot and allows you to focus on photographing the shoot.

Once on location, Ashley sets up an X-Drop Pro Backdrop Stand to mount her backdrop. This is a robust and portable background system that allows photographers to mount an 8’ wide or 5’ wide backdrop. She secures the backdrop stand with H2Pro water weight bags. These bags work great because they can be filled with water on-location.

For lighting, Ashley uses two FJ400 strobes. Her main light is being modified with a 43” Apollo Orb umbrella-style softbox. Her second portable flash is being used as an edge light and modified with an Apollo Strip 1×3 softbox. This add dimension to the image and gives the model a bit of a backlit look.

During the shoot, it’s windy and sunlight is unflattering on the model’s face. Ashley knows she wants some ambient light coming in to help light up the background with the flowers in the foreground.

Overpowering the sun will not give her the look she is aiming for, so she has to find a way to work with the existing light. To fix this, Ashley uses her main light with the Apollo Orb to block the direct sunlight from hitting her subject’s face. This gives Ashley more evenly lit ambient light and allows her to control the lighting on her model with the FJ400 strobes. Because of the modifier’s size, the model has limited space to move within the shadow it casts.

Ashley likes how the light looks in the scene. She uses the light spill as a natural second rim light and lets the model know when to move in and out of the sunlight. Ashley makes sure no harsh light hits the model’s face while still getting a bit on her shoulder.

A challenge using the main light to block the sun is where to place the light. Since it has to be in a certain spot, the lighting on her model is very directional. Ashley instructs her model to pose towards the light and look directly at the camera to allow for more flattering light.

Using versatile and lightweight gear was key to the success of this on-location photoshoot. Having a portable backdrop system allowed Ashley to photograph unique portraits outdoors that would traditionally be limited to shooting in a studio. Blocking direct sunlight with a large modifier is a useful outdoor lighting technique when you don’t have a diffuser to soften the light. 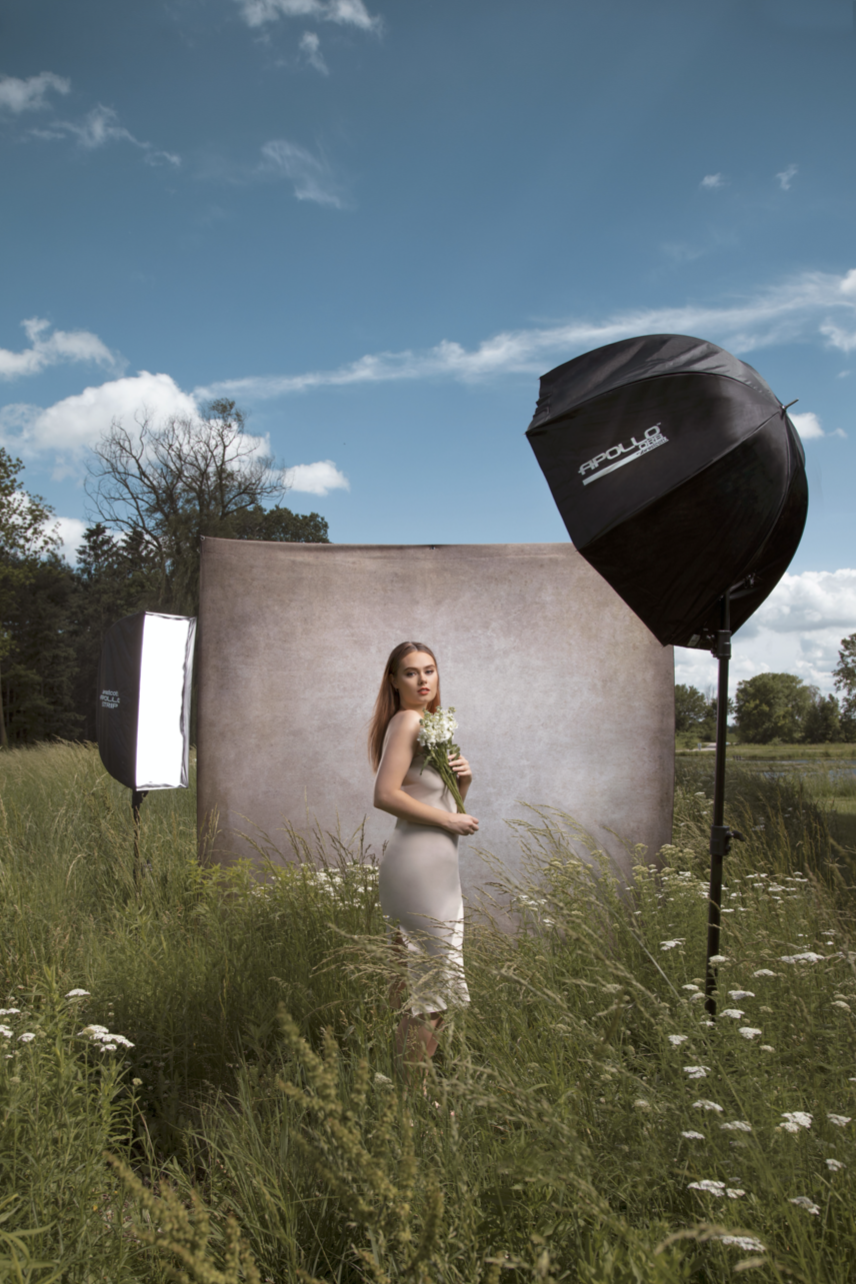